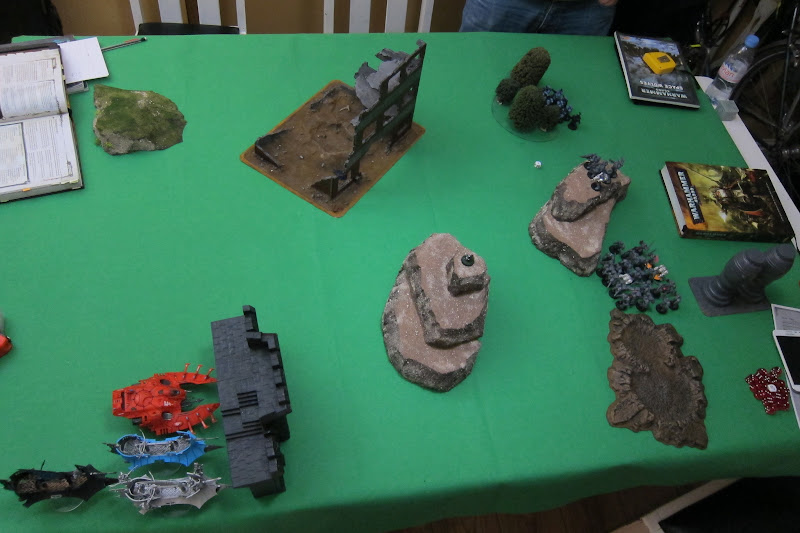 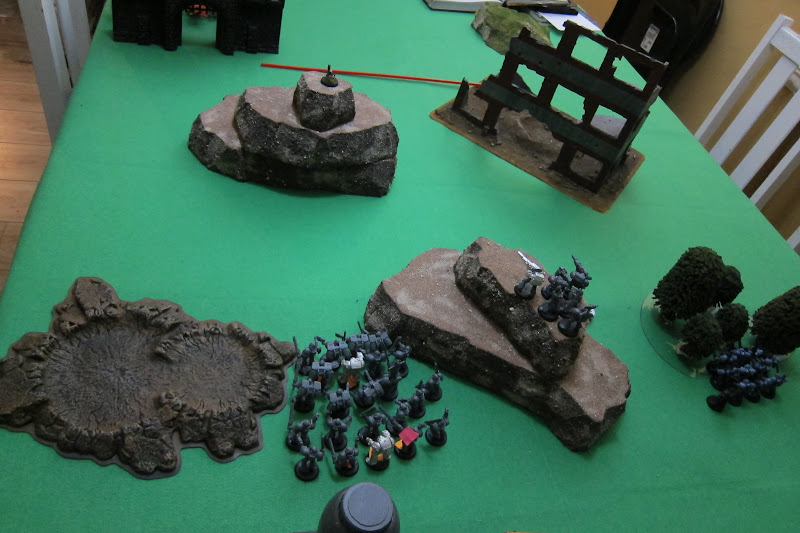 Longfangs on the high ground for maximum line of site, both Assault Marine squads hidden from view behind the large hill. The Grey Hunters were hidden behind the soft cover of the trees to the right flank. 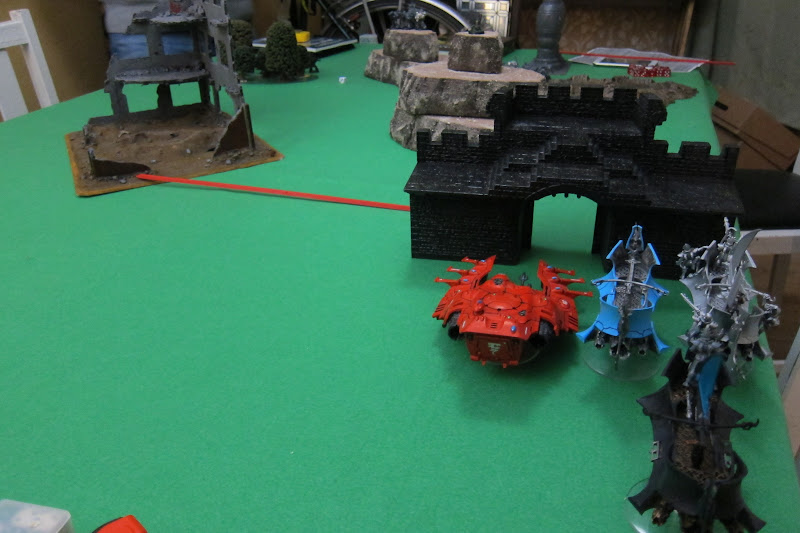 with War Walkers squadron in reserve: 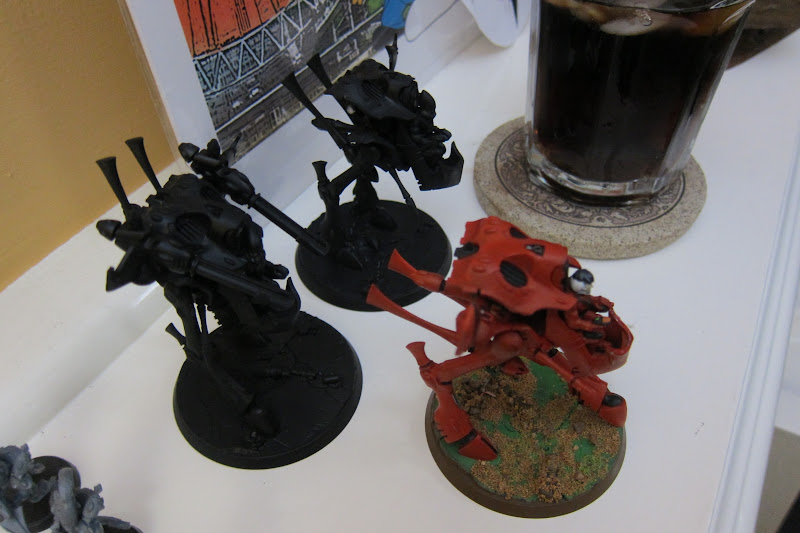 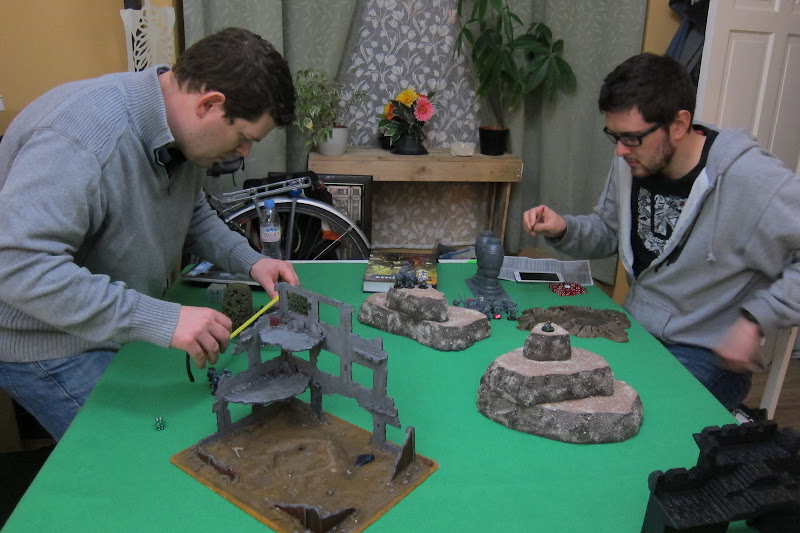 Shane (right) agonizes over where to move… 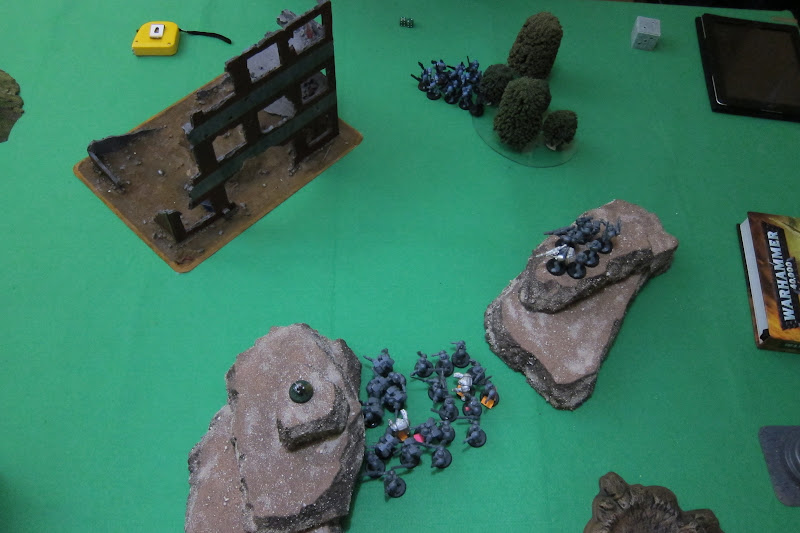 Assault Marines use jump packs to move up 12″, while the Grey Hunters move through the trees and run. The Longfang squad stays on top of the hill, not moving. The Runepriest attempts to use his psyker power, but because of the Farseer’s ability, must roll 3d6 – and he rolls above 12 and suffers a would from Perils of the Warp! No other lines of site anywhere, so no shooting and much too far away to assault. 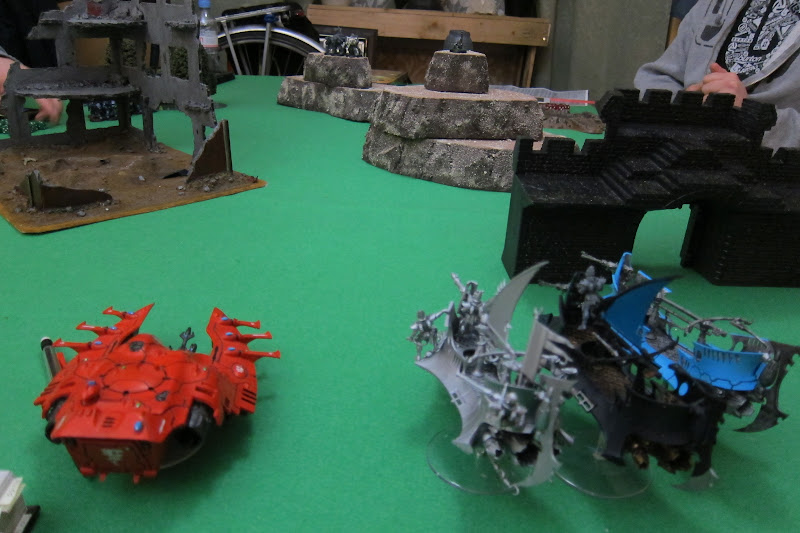 Dark Eldar machinery sideslip 12″ left and…what’s this? A squad of pesky humans in clear view on top of the hill? May as well shoot at them, then…3 Disintegrator shots from each of the Dark Eldar Raiders, AP2, 6 wounds. 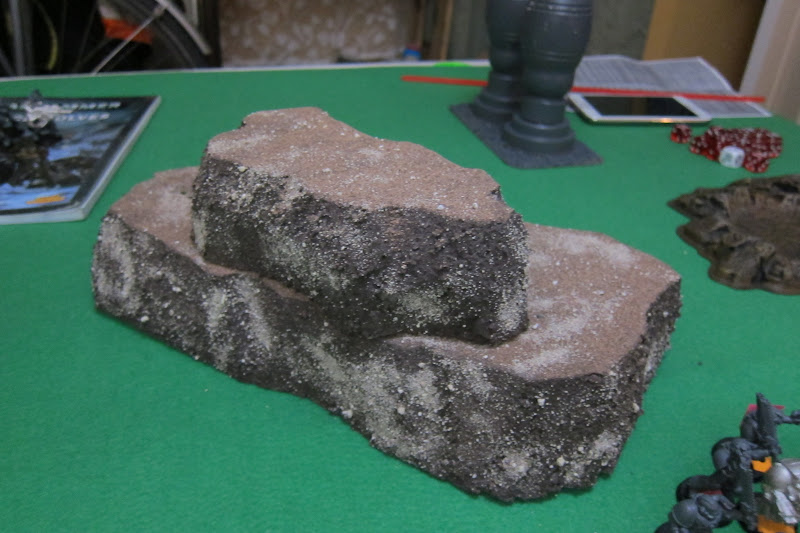 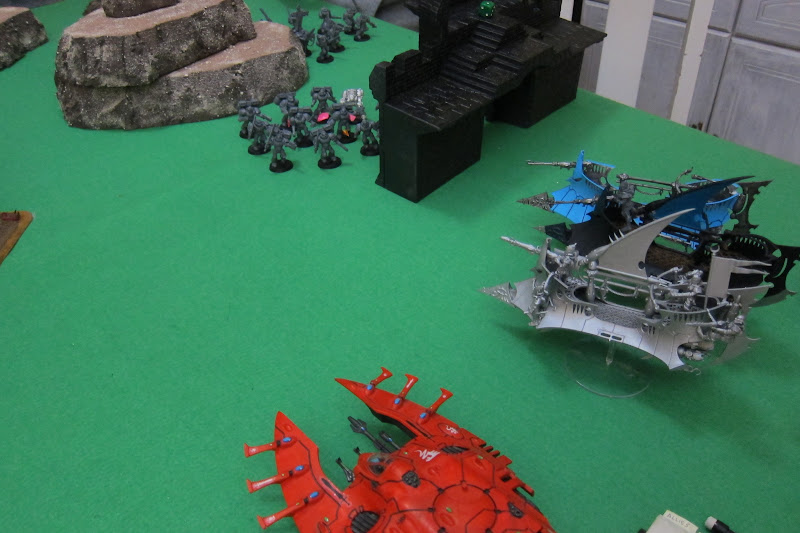 The Marines continue their advance, hindered by the fact they no longer have any long-range weaponry. Their only guns with more than 12″ range are the bolters of the Grey Hunters, farthest from the enemy! So the Assault Marines can do nothing else but continue to advance, and the Eldar allies have positioned themselves just out of distance of shooting and assault range! 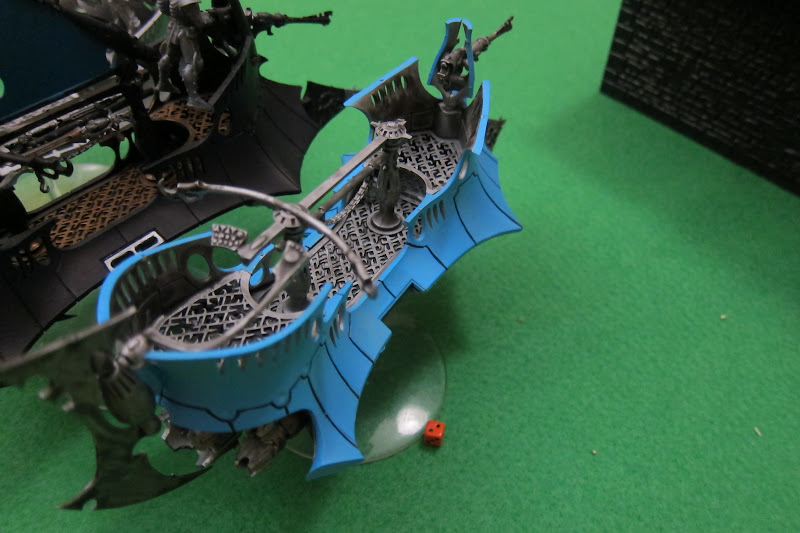 The Space Wolves Runepriest is able to knock one Hull Point off the Archon’s lead Raider, however.

The War Walkers aren’t able to come in from reserves – next round, hopefully! 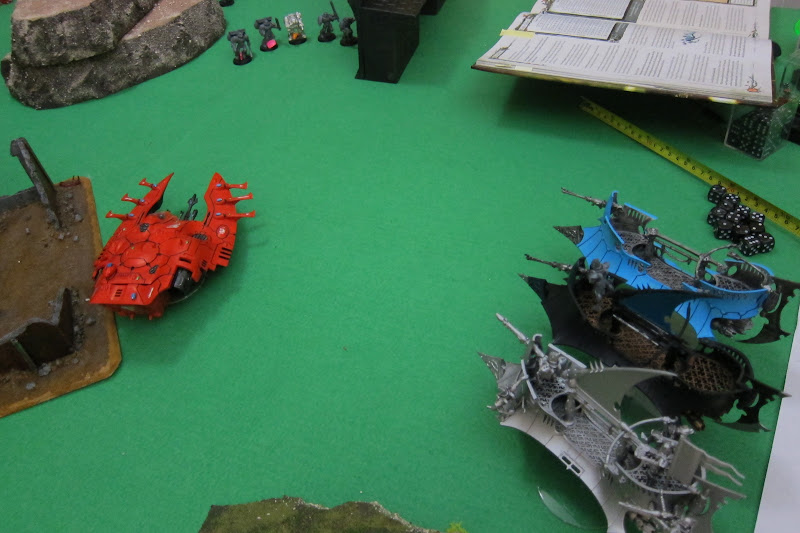 The 3 Raiders sideslip again, and Eldar Wave Serpent moves so it’s in 12″ range so all of its weapons can fire, and together the lead Assault Marine unit is knocked down to 5 men. 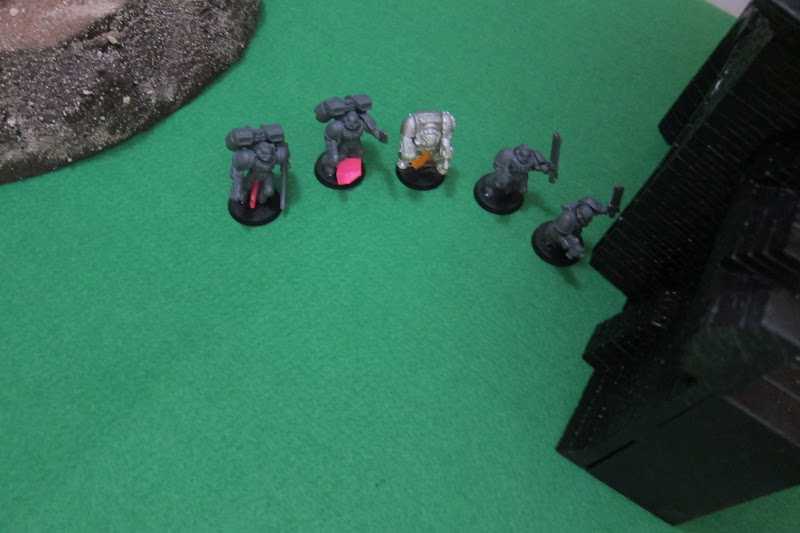 They make their Leadership test and they stay in place! 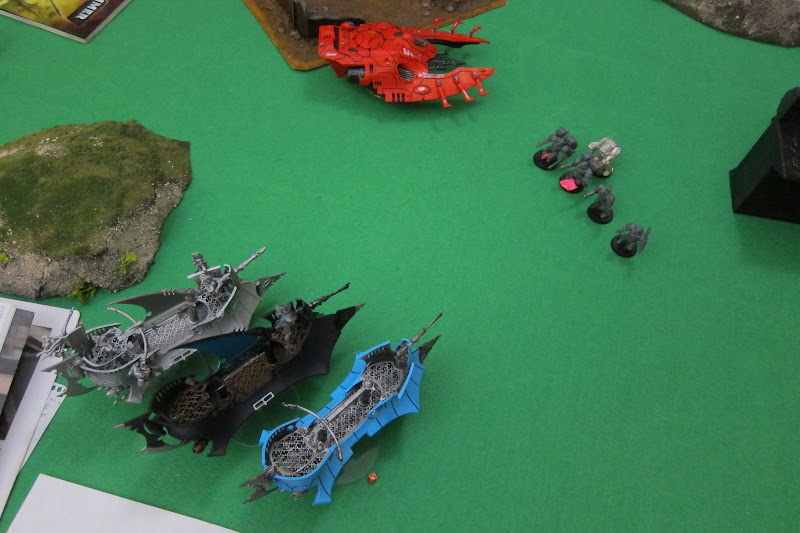 The lead squad of Assault Marines move forward, ignoring the Wave Serpent, hoping to be within assault range of the Raiders. 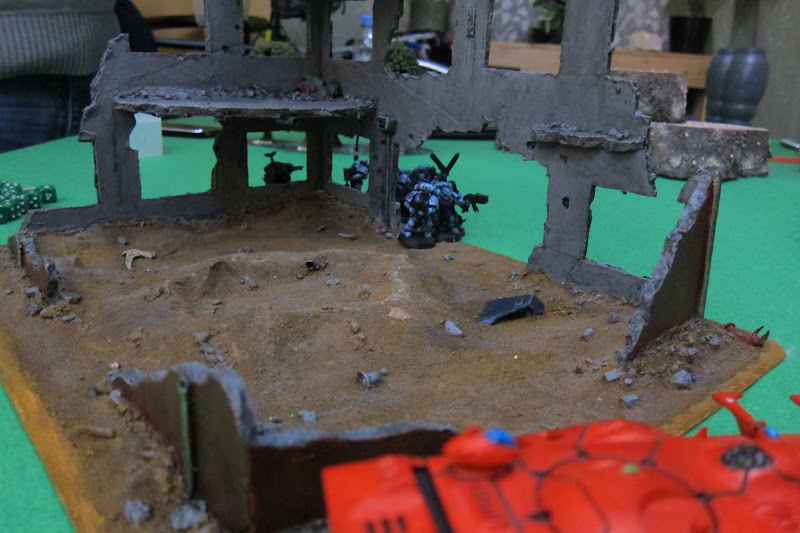 The Wave Serpent is left to the Grey Hunters, whose bolters are unable to do anything to it, but the Runepriest is able to knock it down one Hull Point with his witching ways! 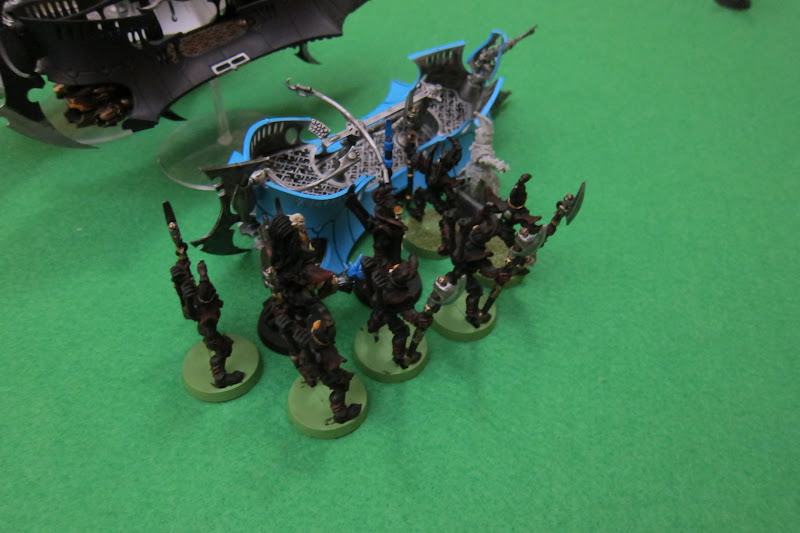 The Archon’s Raider is taken down 2 Hull Points, wrecking it! The Archon and his Incubi are now on foot, so they take cover behind the stricken Raider. 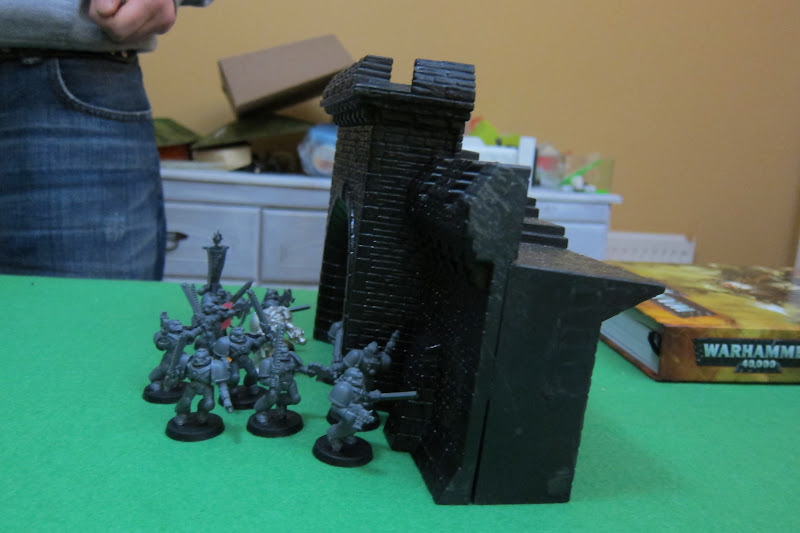 The command squad of Assault Marines hides behind the thick stone walls of the ruined keep, keeping away from the Disintegrators of the Dark Eldar. 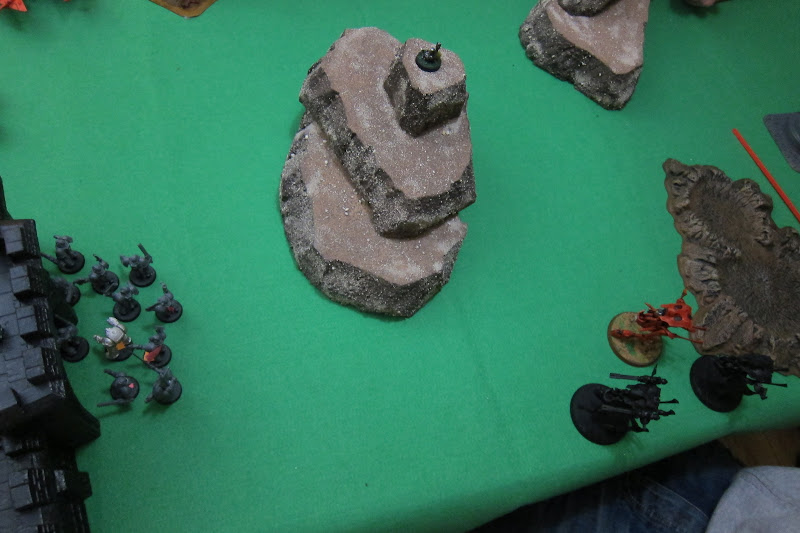 The Eldar War Walkers make their appearance! The Warlord Trait of the Archon allows them to reroll where they come in, but they are perfectly happy to show up behind the Assault Marines. They emerge outside of the move/assault range of this unit, but unfortunately this means they are open to ranged attack from the Grey Hunters across the board.

They unload 24 Scatter Laser shots on the squad, but the Captain with his Iron Halo absorbs ALL the shots with his armor save and Feel No Pain from Iron Halo! 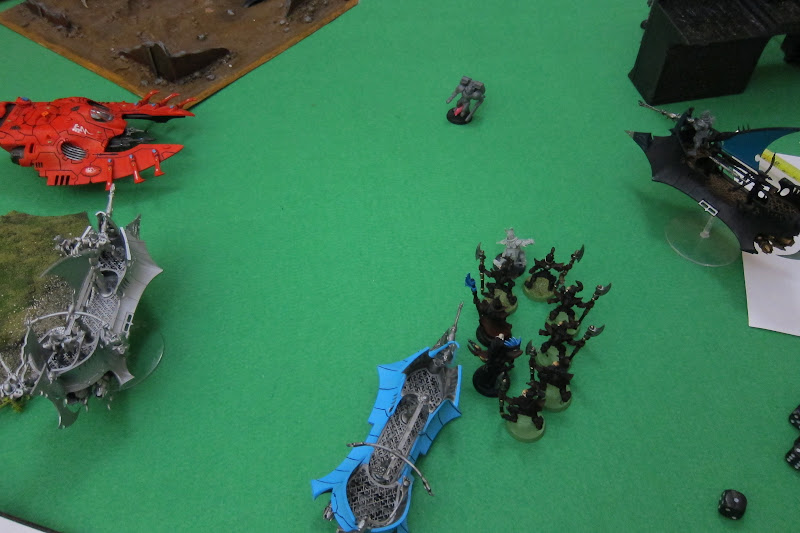 The Incubi move forward, preparing to attack the Assault Marines. The Raider to the left fires its Disintegrator on the Grey Hunters, killing one, then the Kabalite Warriors on board fire, killing another. The other Raider and its occupants fire on the Assault Marine squad, killing all but one. The Wave Serpent misses its shots on the lone Marine, and the Incubi miss their charge distance roll by just half an inch, meaning they can’t assault! 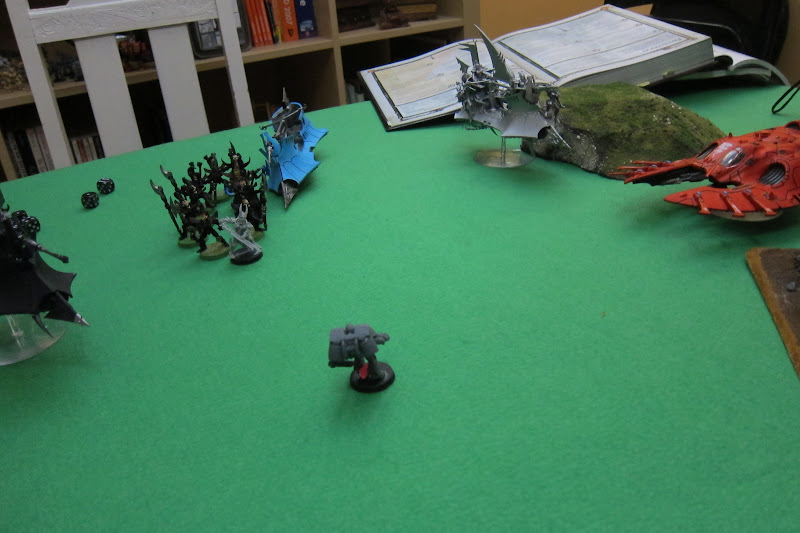 So this one Marine faces all this firepower…alone! Truly a hero. 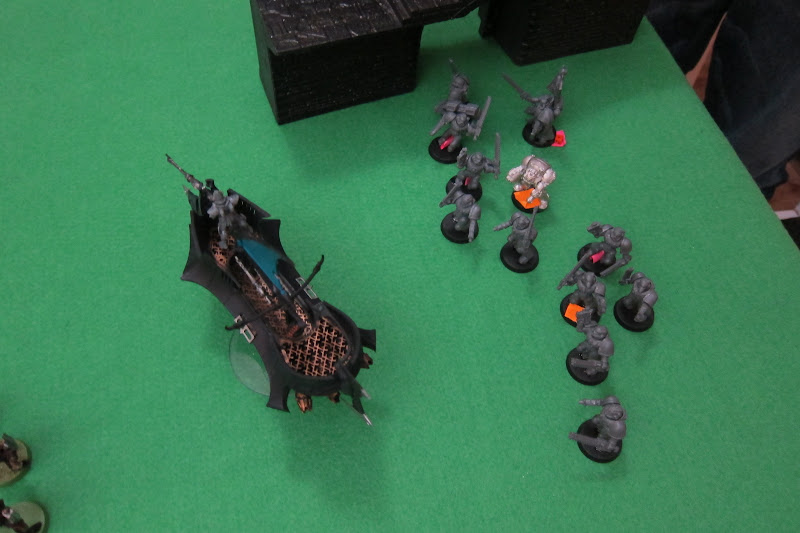 The command squad of Assault Marines jump over the wall while the lone Marine from the other squad rushes over to take cover with the commander. 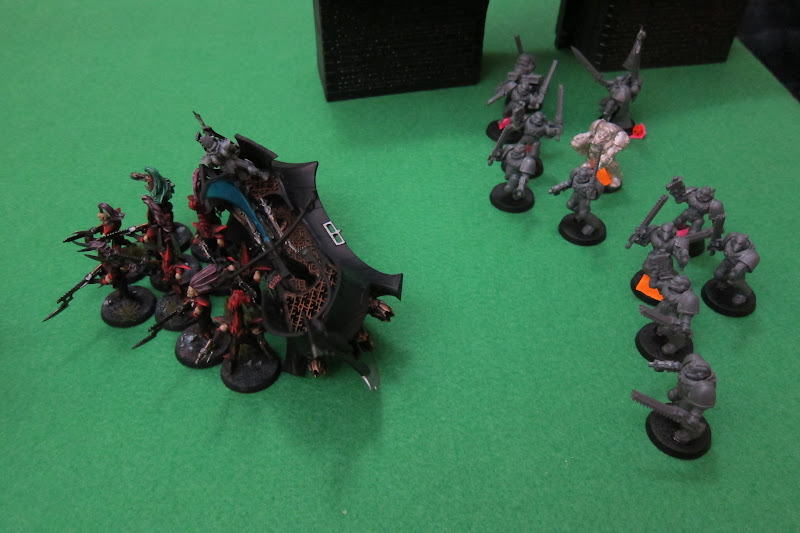 The Raider is wrecked, and the Kabalite Warriors disembark behind the vehicle, taking as much cover as possible! Because they jumped, they have to charge on foot, and they are unable to get the charge range over difficult terrain.

(No picture) The Grey Hunters advance on the War Walkers, unable to hurt it by shooting, but the Runepriest takes the lead War Walker down to 2 Hull Points. 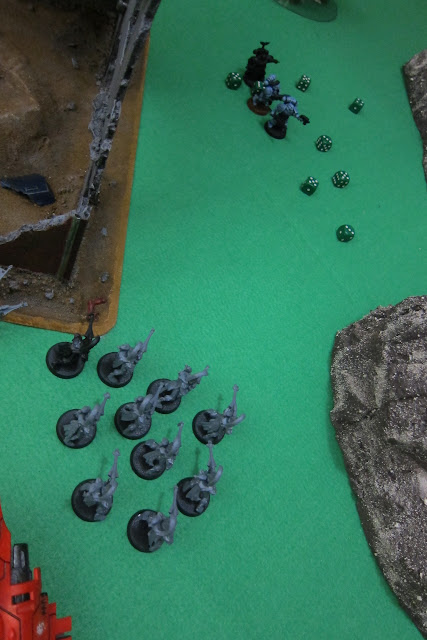 The Dire Avengers disembark at the rear of the Wave Serpent, and together with the War Walkers kill all of the Grey Hunters, leaving the Runepriest on his own with no support and no cover! 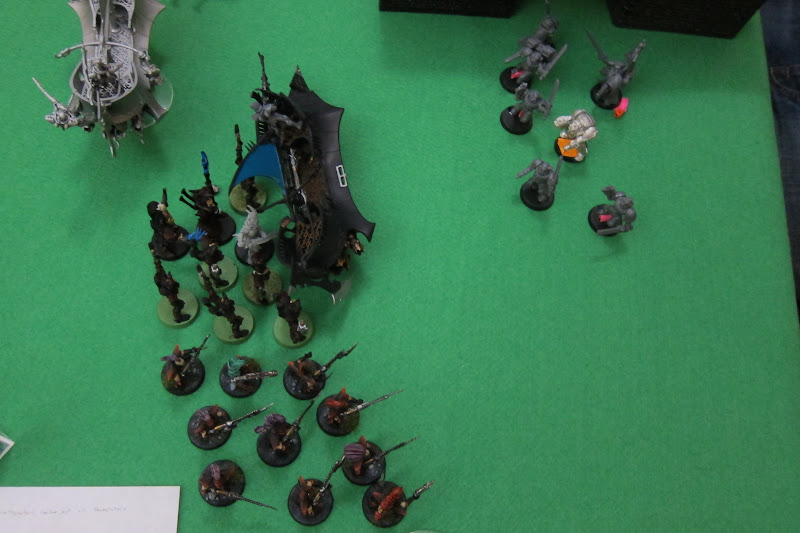 The Kabalite Warriors move over to let the Incubi take cover behind the Raider (probably should have stayed in place) and fire on the Assault Marines, killing a couple. The Incubi attempt to charge over difficult terrain and again fall just half an inch short!

The Assault Marines fire plasma pistols at the last remaining Raider, penetrating and finally getting an explosion! The resulting explosion kills most of the Kabalite Warriors on board and one of the Incubi. The surviving Kabalite Warriors pass their Pinning and Leadership tests and take cover in the ruins. They then assault the large unit of Kabalite Warriors and-  LEAVE TO GO HOME?!

Yes, at this point we had to call the game because of time. Both Marine players agreed that the Dark Eldar would have won eventually had the game continued – even if the game ended after Turn 5, the Archon and Incubi would have been able to get the Assault Marines in close combat and kill most or all of them, including probably the Captain. 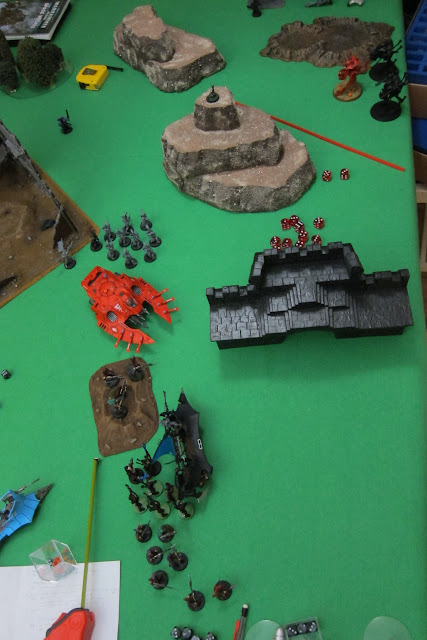 The final scene of the battle (sort of)

THOUGHTS ON THE BATTLE from Frank: Once I started making my list I started getting worried because this was another Kill Point match, and I did pretty terribly in the last one against Marines! To help my odds, I placed large, LOS-blocking terrain in the middle of the table which would give me cover when moving up. I had no idea what the Marines would be fielding, but luckily they decided to footslog it and not take any vehicles at all, so I decided to just fall back in stages and let them walk to me under whithering amounts of fire – which worked!

My Unit of the Match: definitely the Raiders with their Disintegrators! I’d never used them before and the change from Dark Lance (great for vehicles) to a 3-shot Disintegrator really turned the battle to my side from the first turn. The War Walkers were helpful, but they should have attacked the Grey Hunters maybe, instead of the Assault Marines – I didn’t think the Captain would be so hard, plus I didn’t realize he was actually the closest model!

RULES WE MISSED/GOT WRONG: Forgot to do Pinning tests for the first 2 Raiders that were wrecked, but we got the armor/invul saves wrong on the Relictor Captain, which would have probably killed him from the first round of War Walker shots. So swings and roundabouts really. We also need to clarify how the psyker abilities work for the Runepriest, since they’re not FAQ’d and it takes a lot of debate to figure out how they are supposed to work. (internet says Living Lightning attacks one vehicle)

Any comments from Shane and David are welcome!