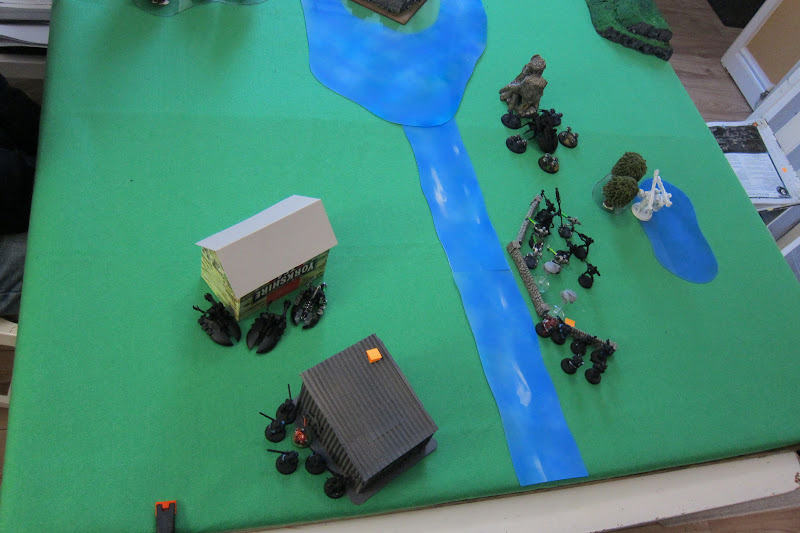 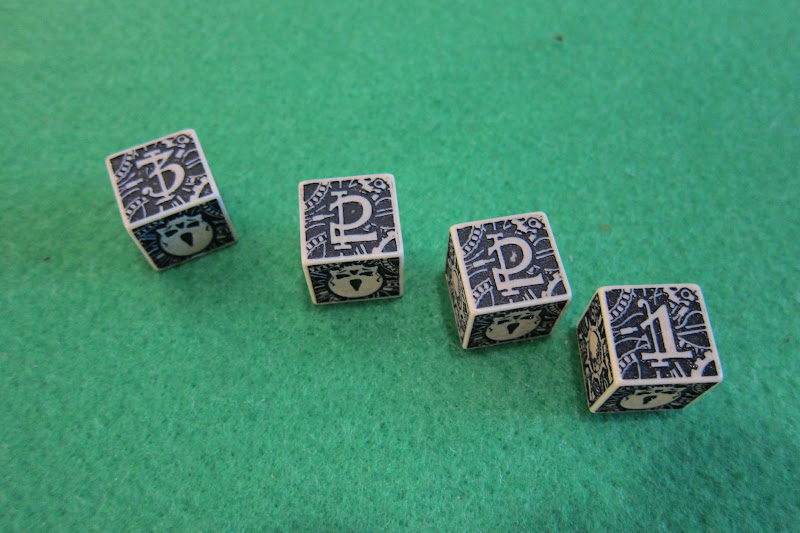 The victory points for the different objectives, randomly placed

Azlobel Kartharax surveyed the terrain that rolled out before him. He smiled and turned to the leaders of the wych squads that would be with him this day. “Leave one of your squads with me, they should hold the ruins just here. Deploy the other two across the river. Hold the ruins with one and move forward with the other.” The hekatrixes nodded and moved away silently to their waiting transports, which hovered just a couple of meters off the ground.
The leader of the Kartharax’s incubi retinue stepped up. “The Tau hold the building with the machine. Silly blue-faces. They don’t know what’s coming.”
Kartharax turned to him, saying “Don’t underestimate these creatures, Zulos. They have the undead with them today.” He nodded to the other side of the river, where he could see a squad of the cyborgs assembling. “But they are all grist for the mines…” 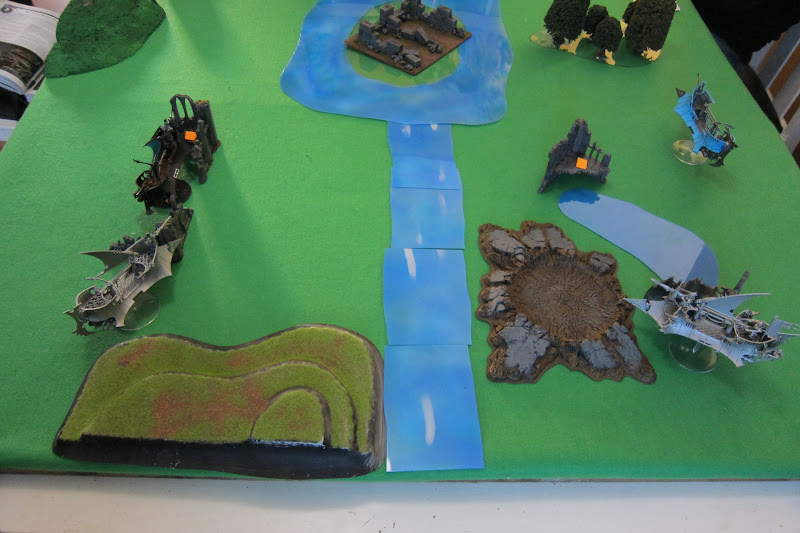 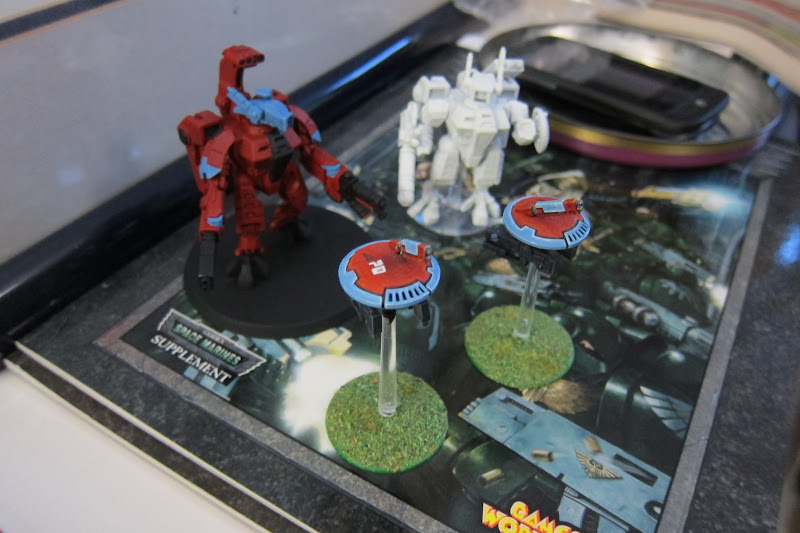 The Tau Crisis Suit with drones and bodyguard 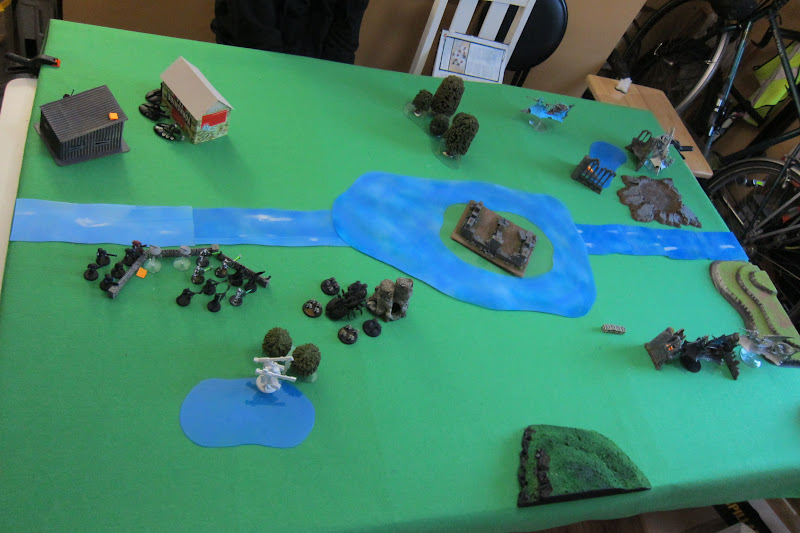 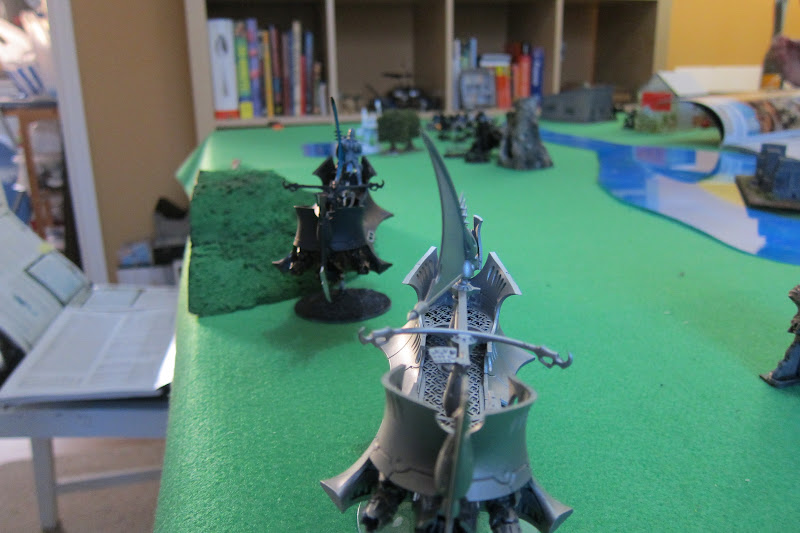 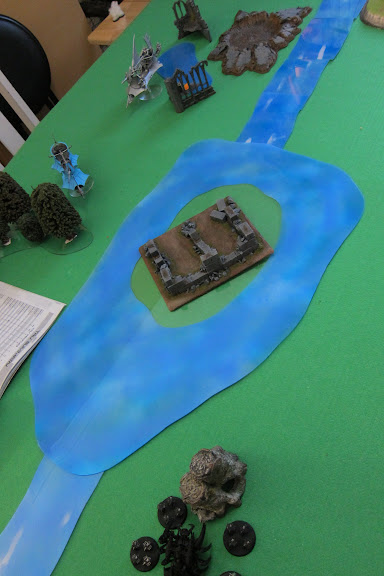 The Raiders on the right flank move to snap shot at the Necron Canoptek Spider, but miss as well 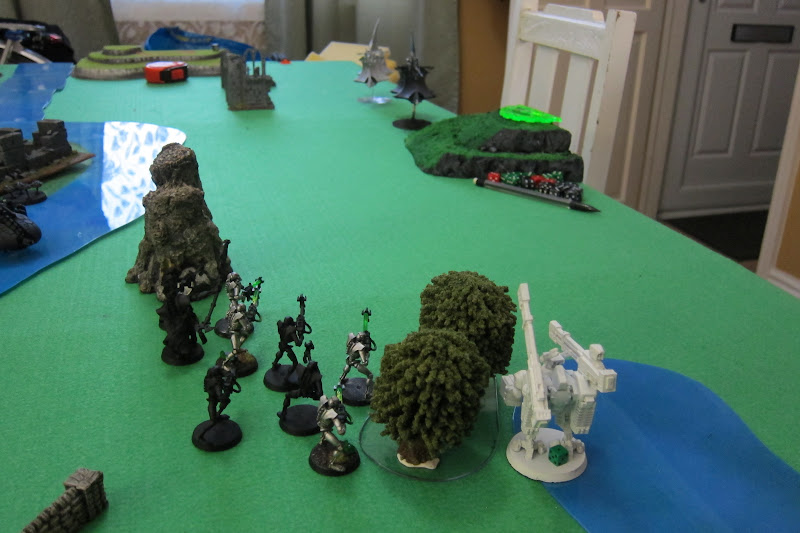 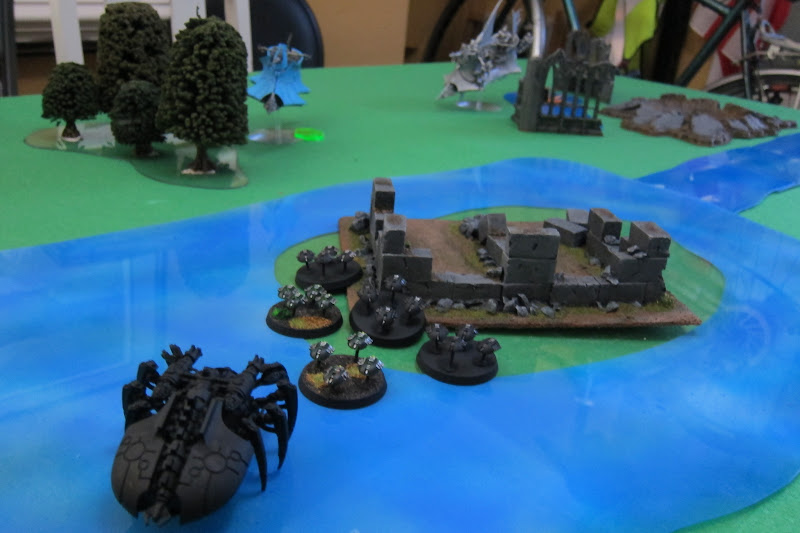 The spider and the Scarabs move across the mysterious lake (rolled randomly, it is a Daemon Bile lake/river, no effect to non-psykers). The units can ignore difficult terrain so skitter across the water towards the blue Raider carrying the Archon and Incubi. The Spider fires its blast weapon at the blue Raider, stunning the crew! An attempted assault fails because of a low charge distance roll. 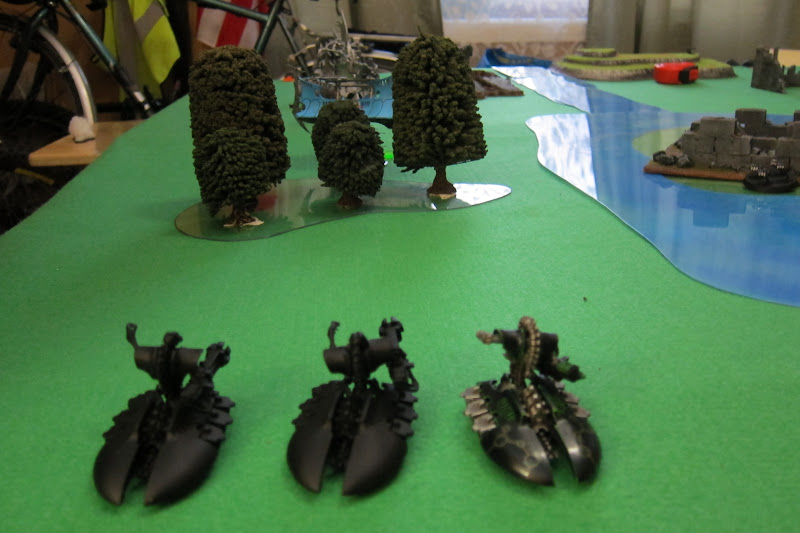 The Necron Destroyers fire their gauss cannons,miss the Archon’s Raider as they fire through the trees! 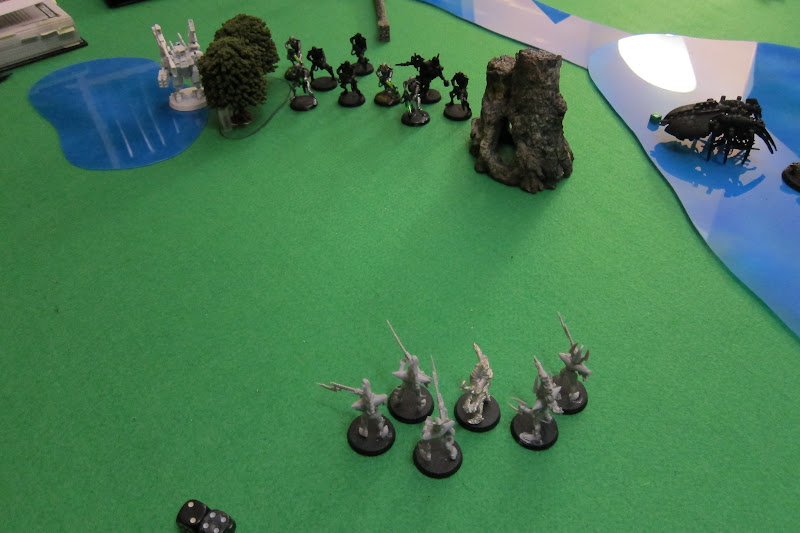 The lead Raider on the right flank fires its dark lance at the Broadside, missing once again, then the Wych squad disembarks. They attempt a charge, but much of the squad is cut down by the overwatch shots from the Necron Warriors and the charge fails! (this was a bad idea!) The other Raider disembarks its Wych squad on the 2-point objective in the ruins. 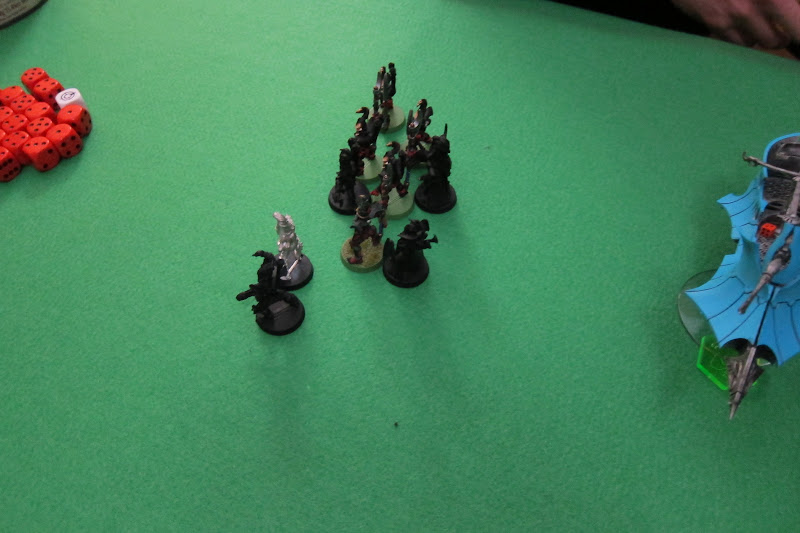 The Archon’s Raider skips over the trees and fires at the Canoptec Spider, missing it, then the Archon and his Incubi disembark and charge the Destroyers, taking them out before they can even respond! This earns the unit a Pain Point for Feel No Pain, plus First Blood to the Dark Eldar! The other Raider behind the trees fires on the Spider, causing a wound as it sits in the water. 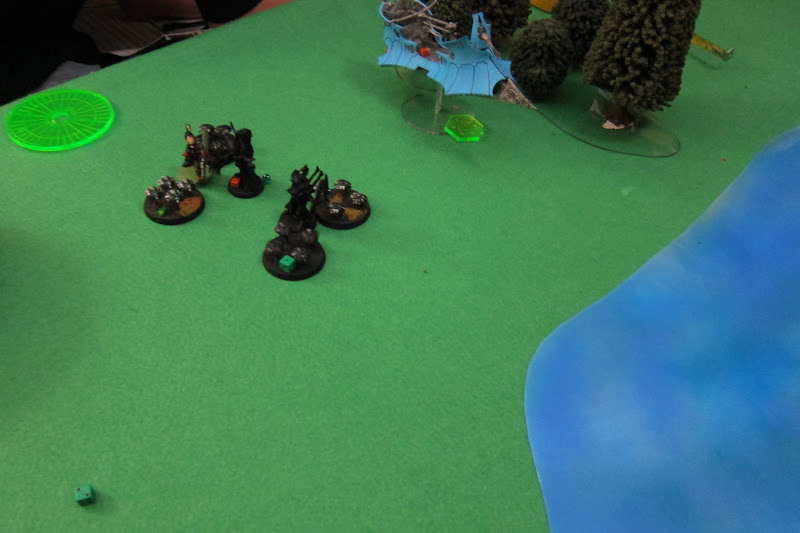 THE UNLOADING: Tau Fire Warriors move out from their objective and fire on the Incubi, killing 2. The Canopteck Spider and Scarabs move forward, then the Spider fires its blast weapon. The Tau Crisis Suit (warlord)  squad then Deep Strikes in and unloads all its weapons on the Incubi, whittling down the squad to just a single Incubi, the Klavex and the Archon. The Scarabs then assault, but on the return attack the Canoptek Spider and a Scarab swarm were destroyed. Archon and Incubi soaking up the damage!

On the other side of the river, the Necron Warriors fire upon the Wyches that disembarked and failed their charge, killing the whole unit. Then the Broadside explodes the Raider that was just behind them. 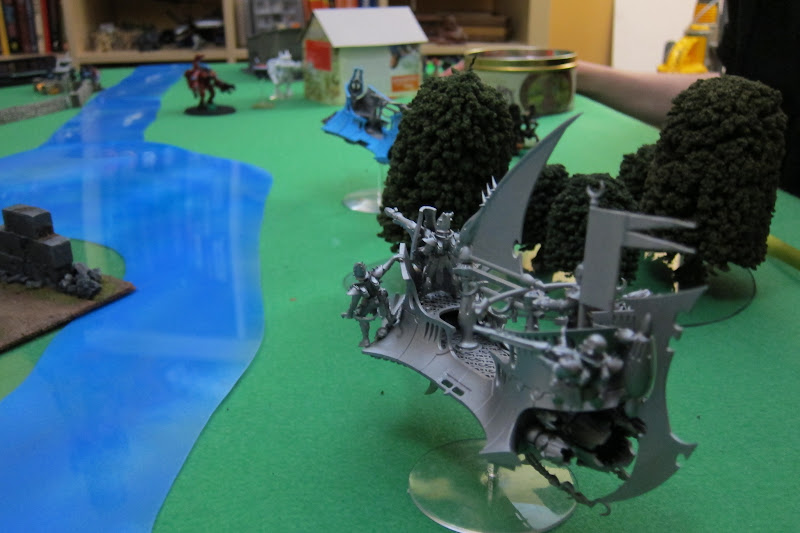 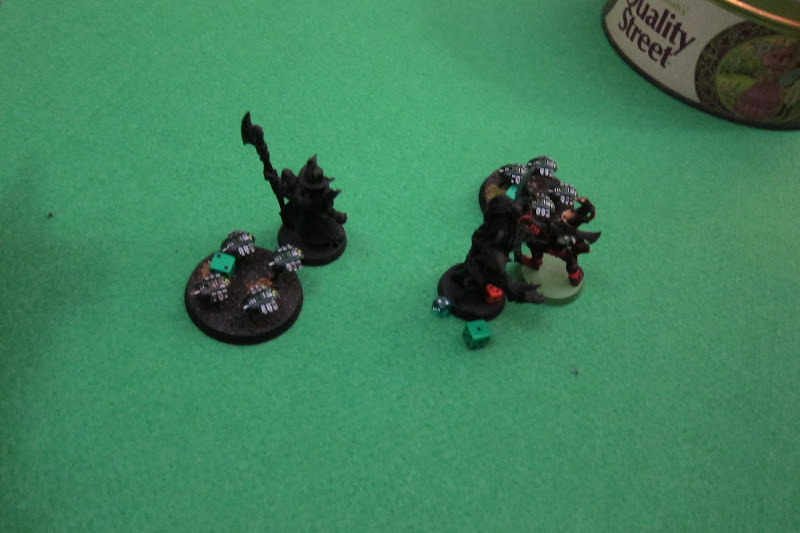 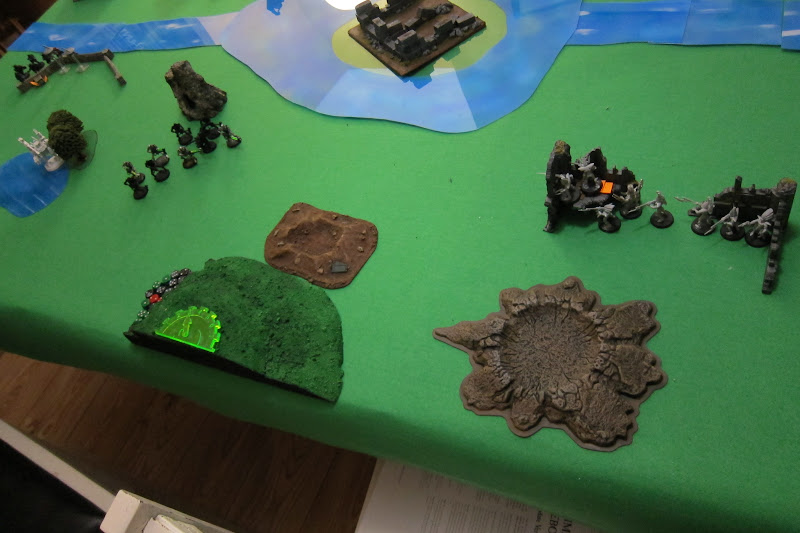 The Broadside immobilizes the Raider next to the ruins, then the Warriors fire on it, exploding it. 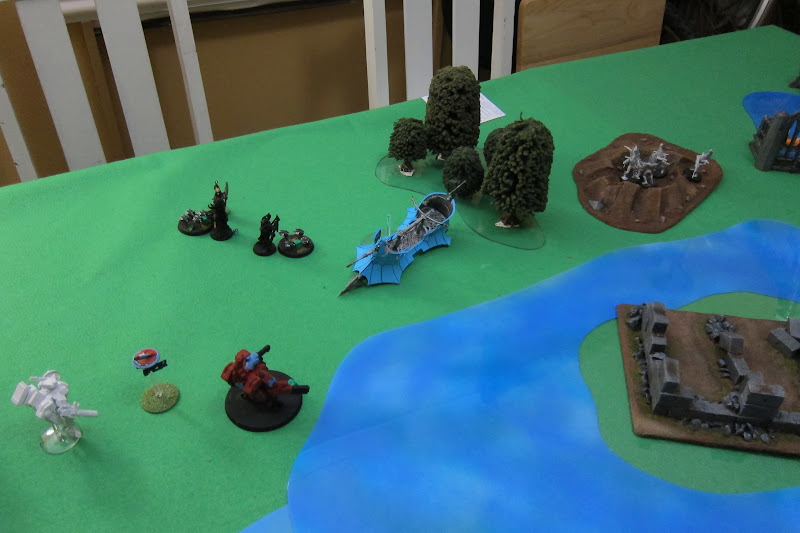 The Tau Captain’s squad moves and fires on the Blue Raider and the silver Raider at the same time (special ability) – the Archon’s blue Raider is wrecked, and the silver Raider with the Wyches is penetrated with an explosion result. 4 Wyches are killed and they pass their pinning test! Amazing. The captain then jump-moves behind the building to his rear for cover from the Archon. The Scarabs are destroyed during their assault phase, meaning no one has been able to fire on the Archon’s unit at all this turn, and he’s free to move.

Archon Kartharax paused, wincing at the pain in his side. The explosion from that damned spider-creature had wounded him, but he would not stop until all these vile metal-men and blue-faced Tau were lain at his feet. That, or until Kartharax himself was killed.

With the last of the small insectoid creatures laid to waste, he looked around him to assess his own unit. Almost all were dead, either killed by weapons fire from the blue-faces that had moved from behind the nearby buildings, or slaughtered by the flame and slug weapons carried by the metal-suited Tau that had landed from the clouds just a minute before. The only remnants of his squad were his loyal Klaivex Zulos and a single Incubi under his command.

Kartharax looked to where the Tau captain had been, and saw the jet exhaust and burnt grass that indicated he’d jumped away – the trail of smoke led behind a pitiful shack of a home, and the foot of the Crisis Suit could be seen around the corner. The Archon started moving forward. “Zulos. Come. We have more killing to do.” 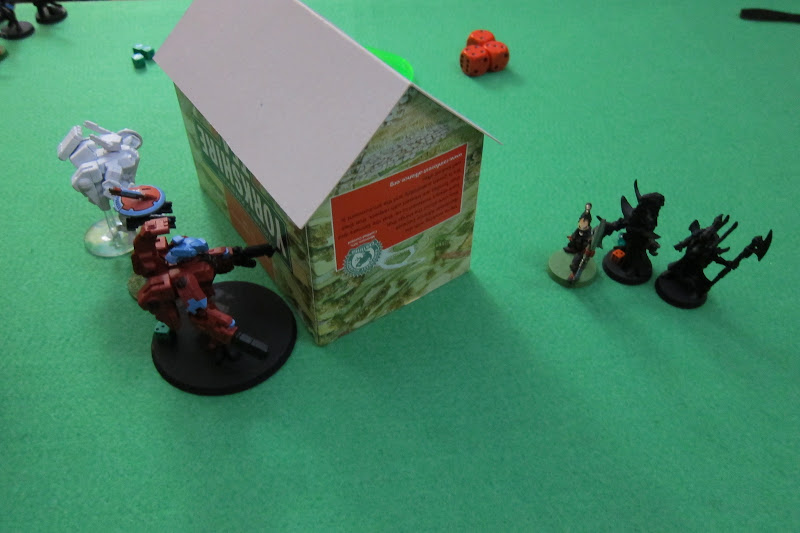 The Archon moves, then runs (his Warlord trait let him roll and extra dice for running, plus Fleet allowed him to reroll any run dice)… 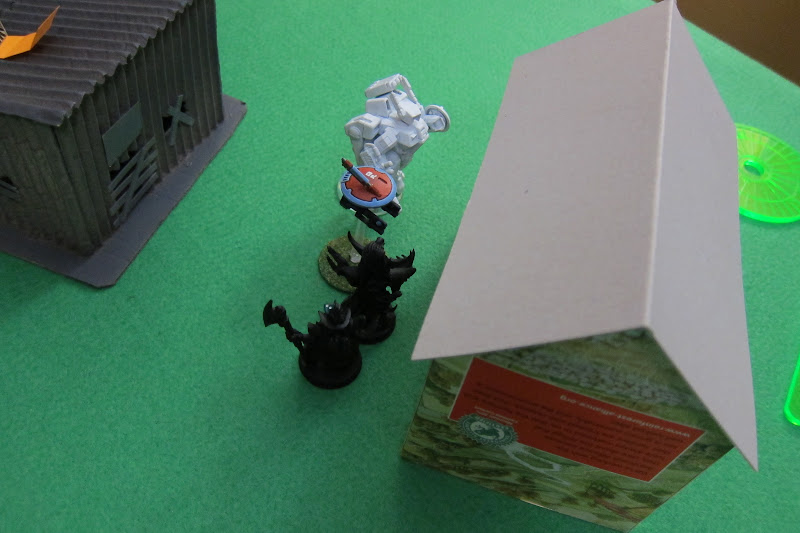 And the Archon gets his revenge on the Tau captain (Slay the Warlord objective)! At the cost of an Incubi, but such a small price to pay. Because the Archon is in close combat again, the Tau Fire Warriors are unable to fire upon him. 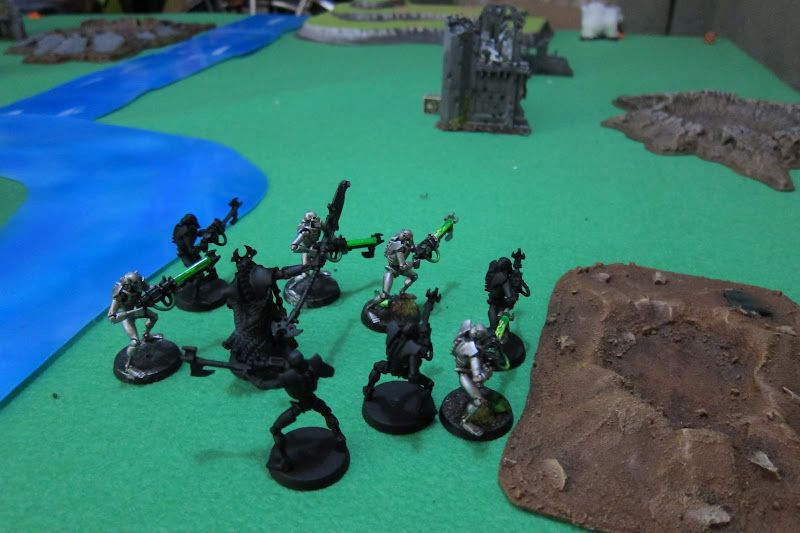 The Necron Warriors continue to move forward, itching to take away the objective from the Wyches! The Wyches are deep in cover, however.

On the other side of the river, the Tau Fire Warriors move to reclaim the objective at the metal shack, then the Archon and Klaivex are able to kill the remaining Tau drone and bodyguard, meaning they are free to move once again. 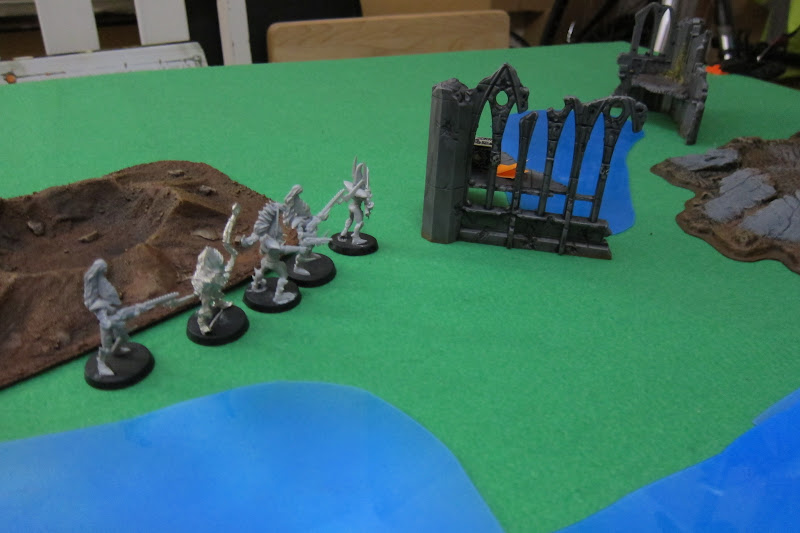 The surviving Wyches from the exploded Raider run to make it back to the unclaimed objective. 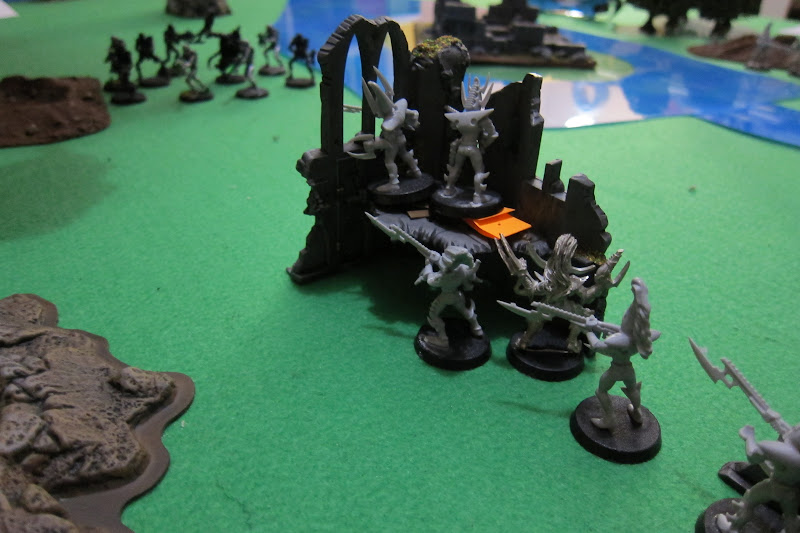 While the Wyches on the other side of the river are holding their objective and waiting for the Necrons to advance. 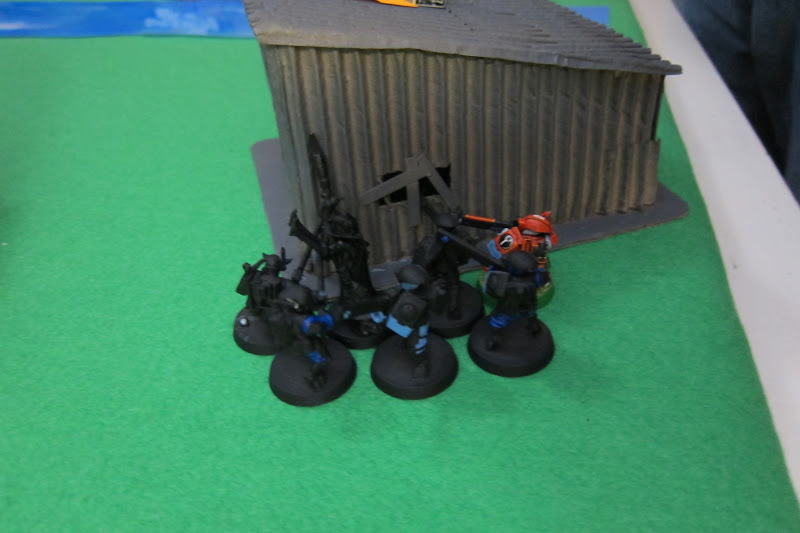 The Archon and Klaivex, having wiped out the Tau bodyguard and drone, assault the Fire Warriors, but a lucky shot kills the Archon! The Klaivex is still able to get into combat and kills one of the warriors. 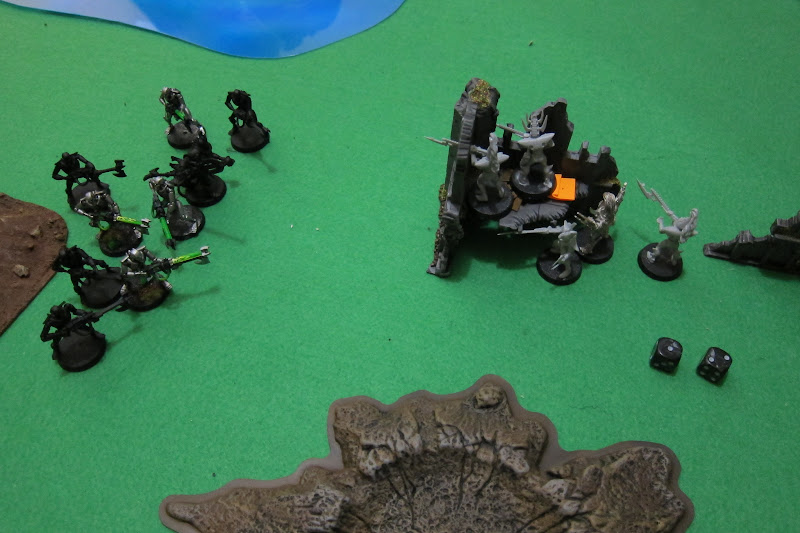 The Broadside finally kills one of the Wyches in the ruins, then the Necrons fire on the Wyches, focus firing on the ones they can shoot most effectively – 4 are killed and this unit of Wyches also roll an amazing Leadership roll! The Necrons then fail their charge distance roll somehow.

END OF TURN 5 – THE BATTLE CONTINUES!

The Klaivex kills 2 more Fire Warriors, who fail their Leadership roll and they run off the board. 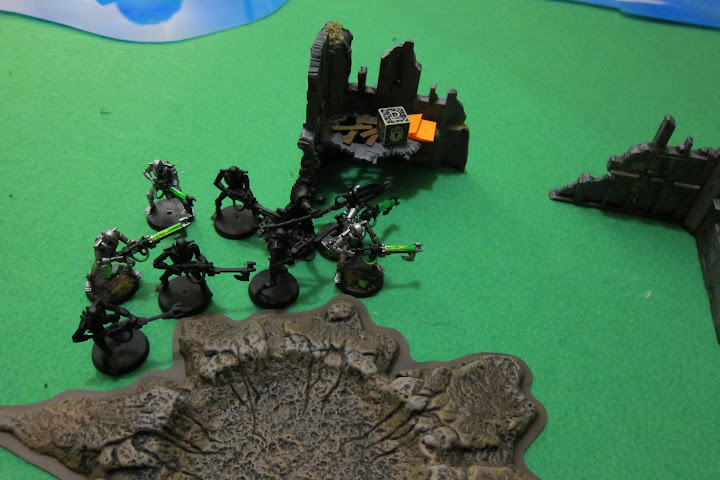 The Necrons move in and fire on the Wyches, who should have assaulted in the last turn. All the Wyches are killed 🙁 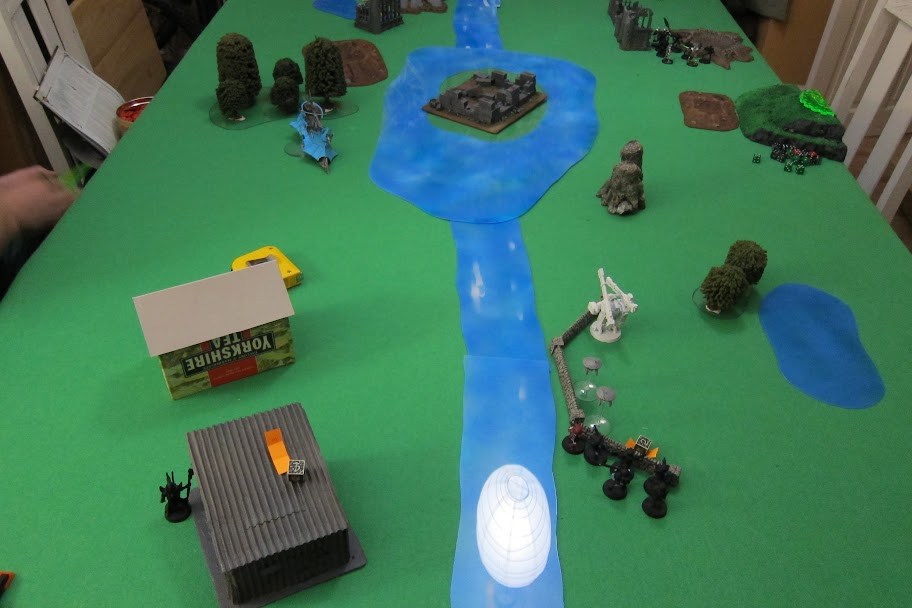 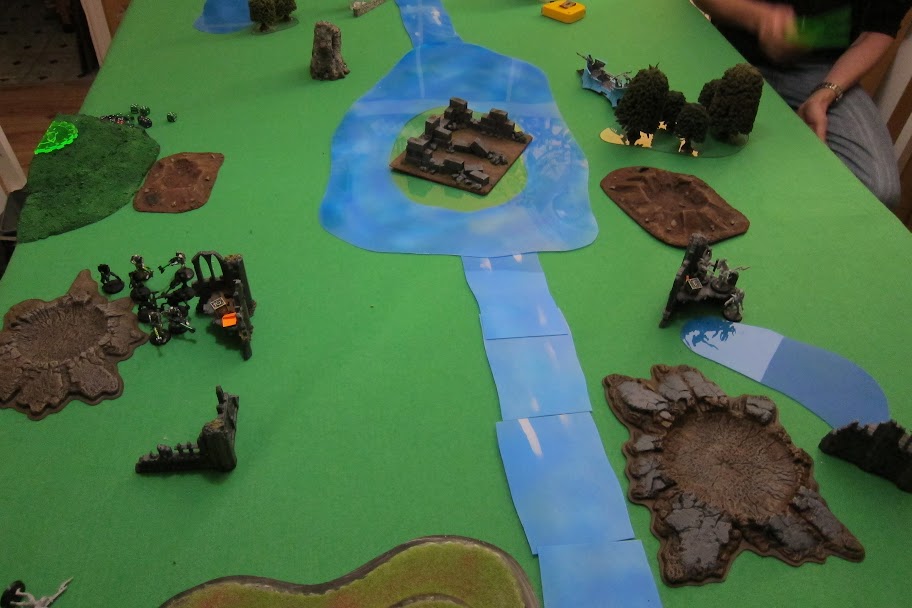 Zulos, the last surviving member of Lord Kartharax’s personal unit, walked out from behind the buildings to observe the battlefield. To his right, the surviving Tau warriors were fleeing into the smoke and haze, back towards the city they where defending. Across the smoothly flowing river, another unit of Tau warriors were watching them intently, their drones hovering near their helmeted heads. The large Tau battle suit looked untouched and stood in a guard position near the warriors on foot. They weren’t aiming at him, but they weren’t making a move to cross the water, either. Nearby, the body of Lord Kartharax lay, covered in gore. Zulos walked to his body, kicked a limp arm aside and grasped the hilt of Kartharax’s huskblade, still humming with power.

One day, soon, Zulos would wield this weapon himself against these foes. 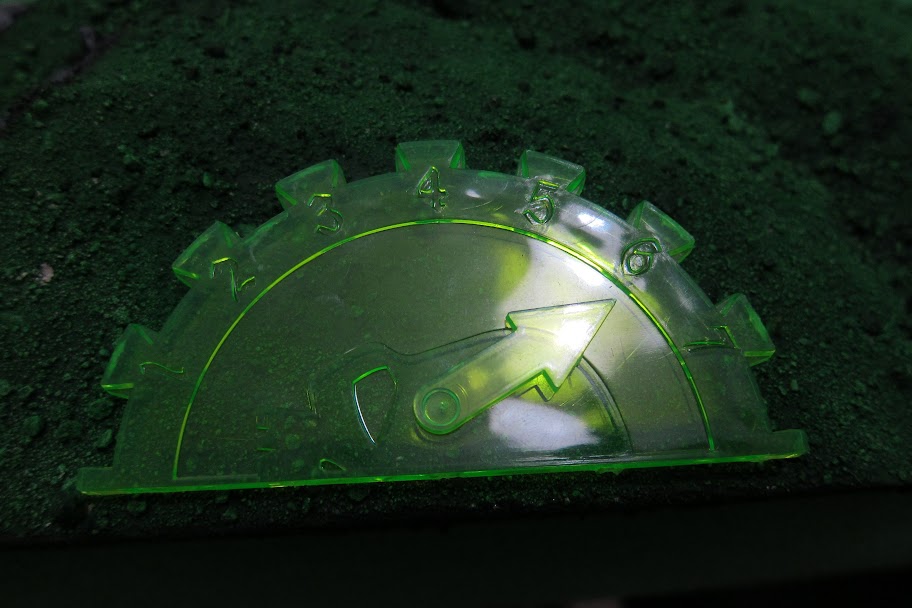 THOUGHTS ON THE BATTLE from Frank: I’m much more satisfied with this battle than with previous ones. I wasn’t really tempted to try Chaos allies because I wanted to try the all-Wych attack. Apart from trying to hold objectives with assault-specific units, I didn’t do too bad. I should have moved the Wyches on the right flank up faster to contest the 3-point objective and help the Incubi, but moving them back when I did to hold the 1-point objective saved the game for me. On the left flank, I assaulted the Wyches too early, which got them all killed, but if I’d moved the Raider up further they wouldn’t have been able to assault until the following turn, so the Necrons would have been able to take out the Raider anyway. So I think that battle was a wash either way. Towards the end of the game, I should have thought about assaulting the Necrons as they came forward, since the objective was going to be contested either way – and probably lost – but at least I might have been able to take a few Necrons with me! Again, the objectives should have been held by cheap Kabalite warriors who could shoot, rather than the Wyches who are armed only with pistols.

My Man of the Match was yet again the Archon, soaking up loads of damage with his clonefield and Feel No Pain from the first pain point. It’s a real shame he didn’t survive, but that’s the breaks I guess. Watching him march from unit to unit and wipe a whole side of the board clean was great!

RULES WE MISSED/GOT WRONG: I think we might have forgotten to have the Archon and Incubi roll leadership tests a couple of times, but I can’t really remember.

Any comments from David are welcome!