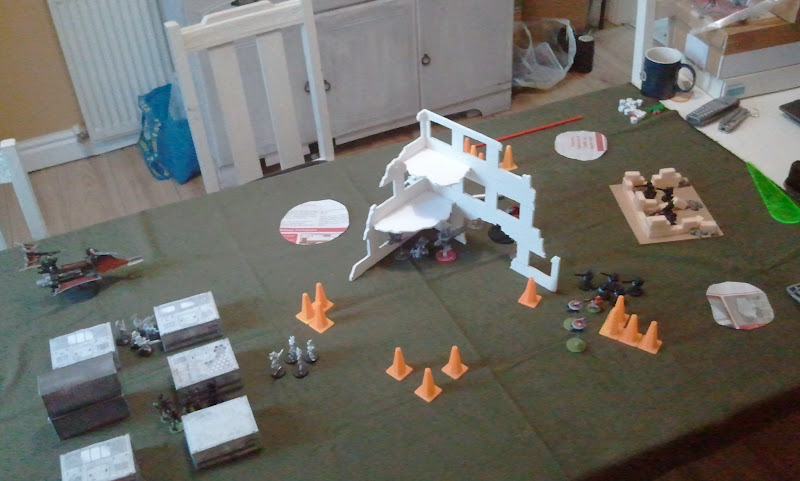 OK so here’s the first of the ‘Past BatReps’ – this one a battle between David and I, probably a couple of months ago.

This is before we had proper terrain, a gaming board, colored felt or even craters! Prepare yourself!

The best I can remember, David and I took turns setting out the terrain and then we rolled for which direction the table edges would go, then rolled for starting position. I think Tau won the initiative and you can see the starting positions from up above.

For terrain, we had black and white printed modular buildings, the beginnings of the big 3-story office building, circular newspaper cutouts for craters and a small ruined building I bought as a kit on eBay to try it out. The traffic cones are just to mark the remaining edges of the building and other impassable terrain.

This battle was fought with 5th edition rules, with me looking up things in the tiny rulebook and David trying to remember things from 4th edition (or earlier?). So it was pretty frantic, yet slow going 🙂

The first thing the Tau did was take out the single Raider, which was carrying a bunch of fragile Kabalite Warriors. The Tau Fire Warriors huddled in the small ruins, while another squad moved up the right flank with drones to protect them. The command squad moved up take cover behind the building, and I was sure there was a squad of infiltrating Stealth Suits, but that could be another battle I’m remembering.

On the Dark Eldar turn (which is when this picture was taken, I believe) the Kabalite Warriors left the stricken raider to take cover amongst the small buildings, the Reavers moved up to engage the Tau command squad (they have Skilled Rider so don’t have to take Dangerous Terrain tests when they stop over ruins), the Scourges leaped forward and the Archon/Incubi command group started walking forward.

The Tau command squad kept failing the regroup rolls, but towards the end of the game there were still 2 squads of Fire Warriors on the board and very few Dark Eldar, so it was a win for the Tau.