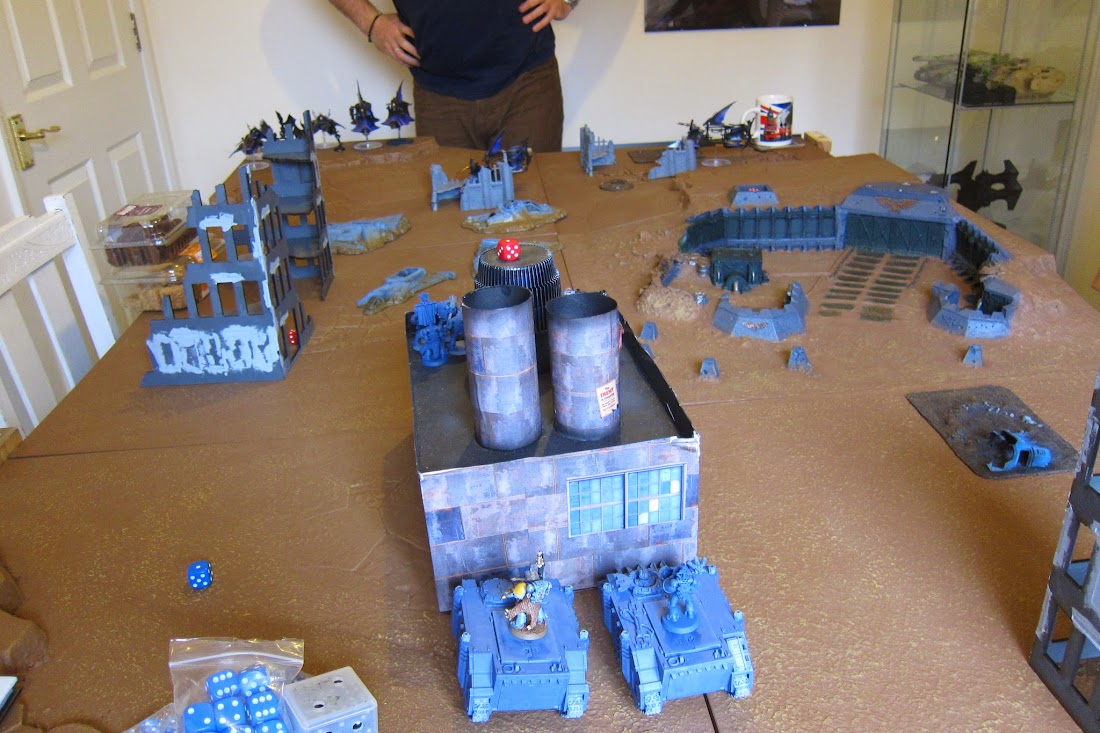 First was Dave against my Dark Eldar – I didn’t have a 1500 pt list ready that I was happy with, so let Dave and Jack set up the terrain while I fiddled about in BattleScribe. Once I was ready, we rolled for Warlord Traits, game type, mission, deployment, etc. We ended up with a Maelstrom of War mission, the one with hidden mission cards, playing from the short table edgles, the ‘long way’.

Dark Eldar started first as Dave gave up his deployment roll of a 6, and just a couple of Raiders full of Kabalite Warriors started on the battlefield, sitting on objectives inside the Dark Kin deployment area. 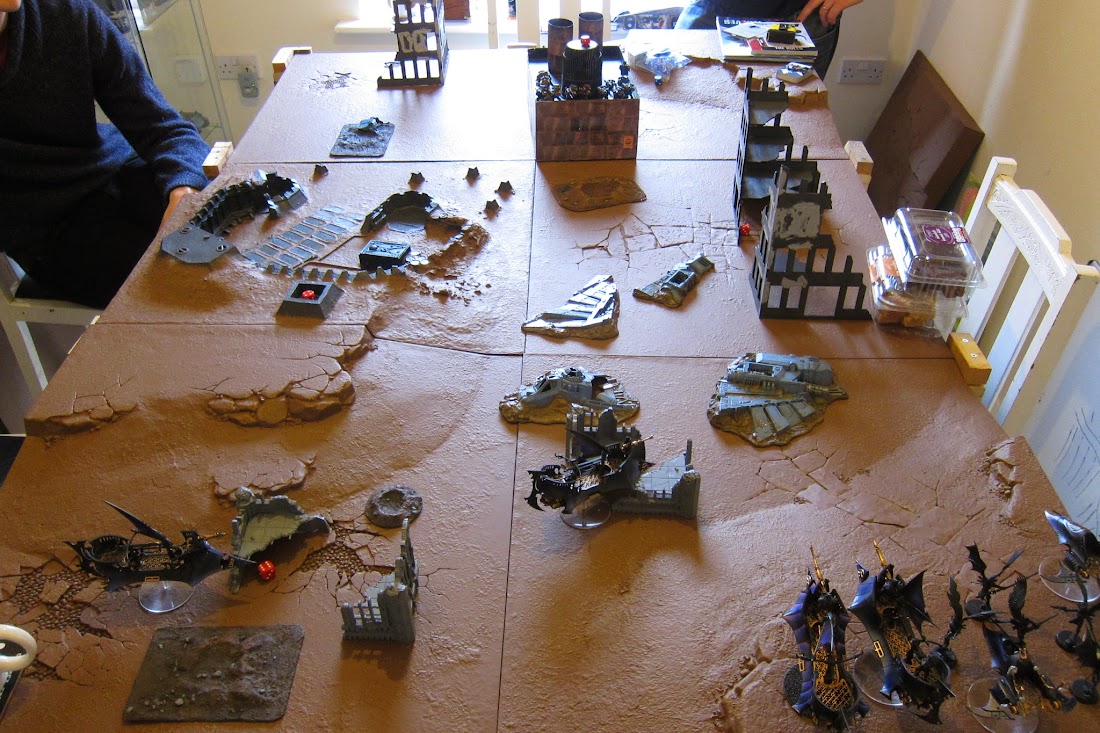 View from the Dark Eldar side 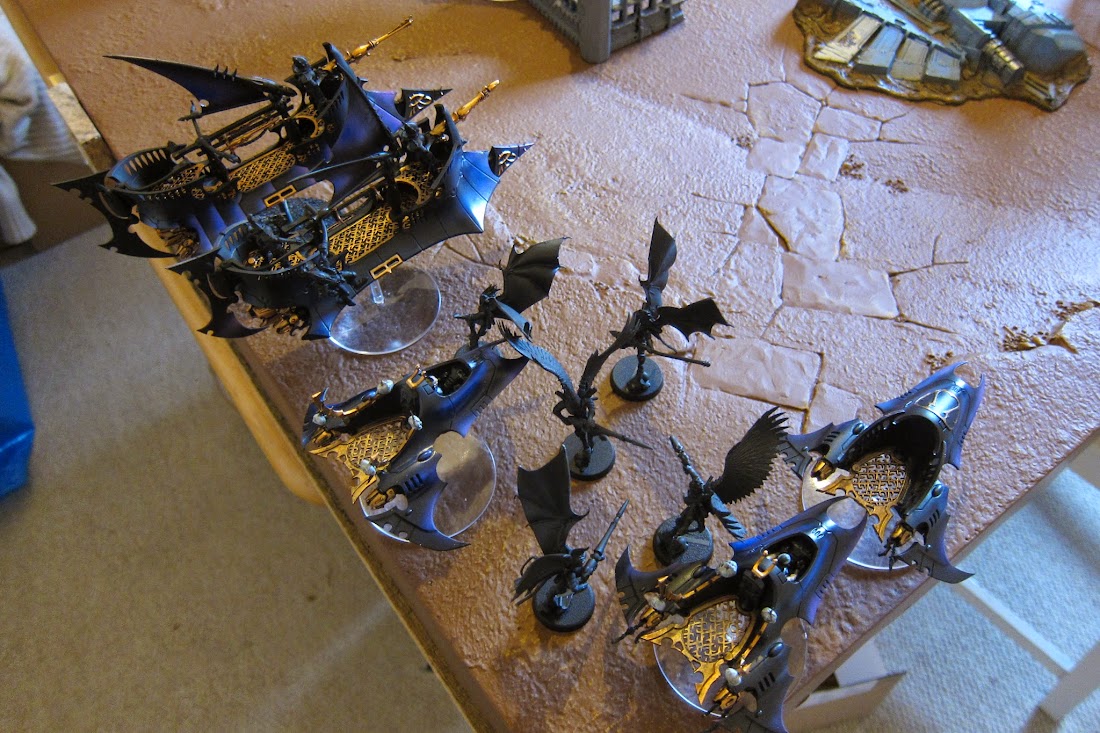 Plenty of Dark Eldar in reserves! 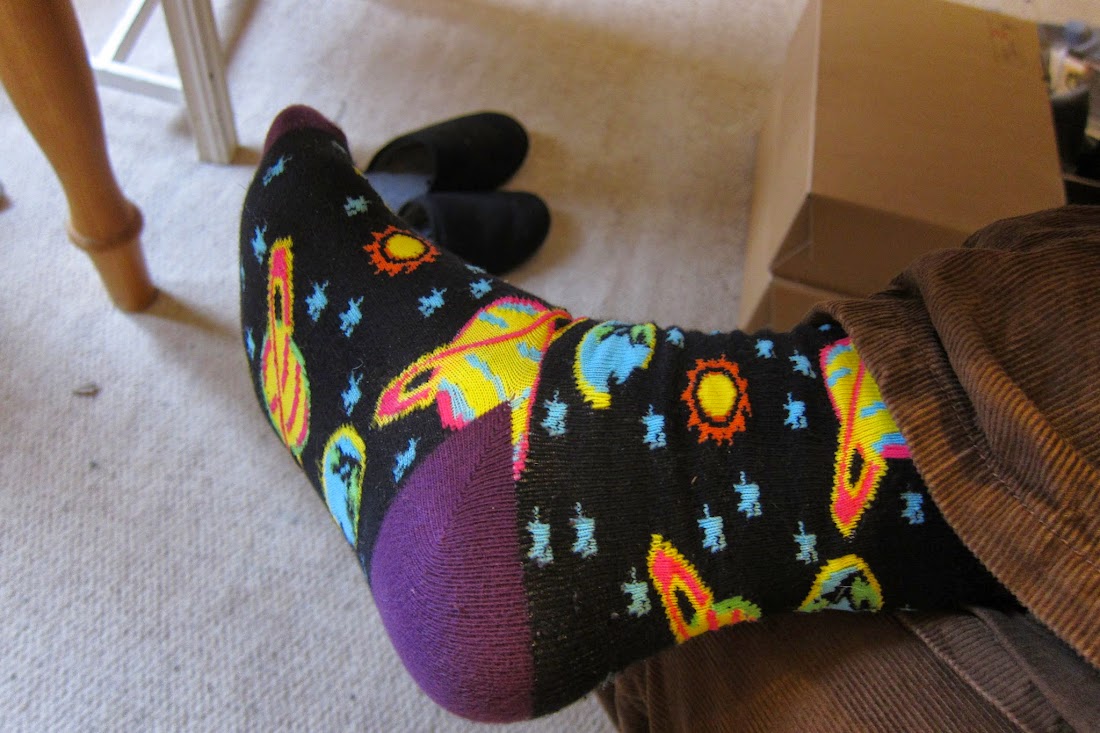 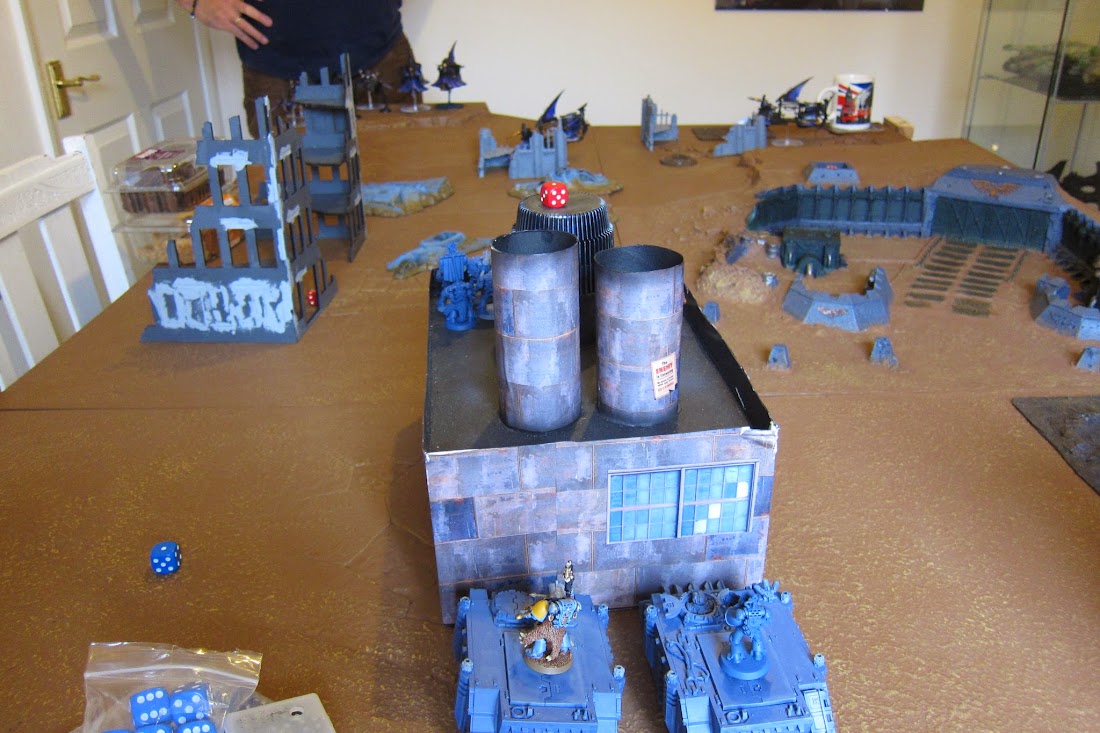 The view from the Space Wolves side, with 2 squads of Long Fangs on top of the factory 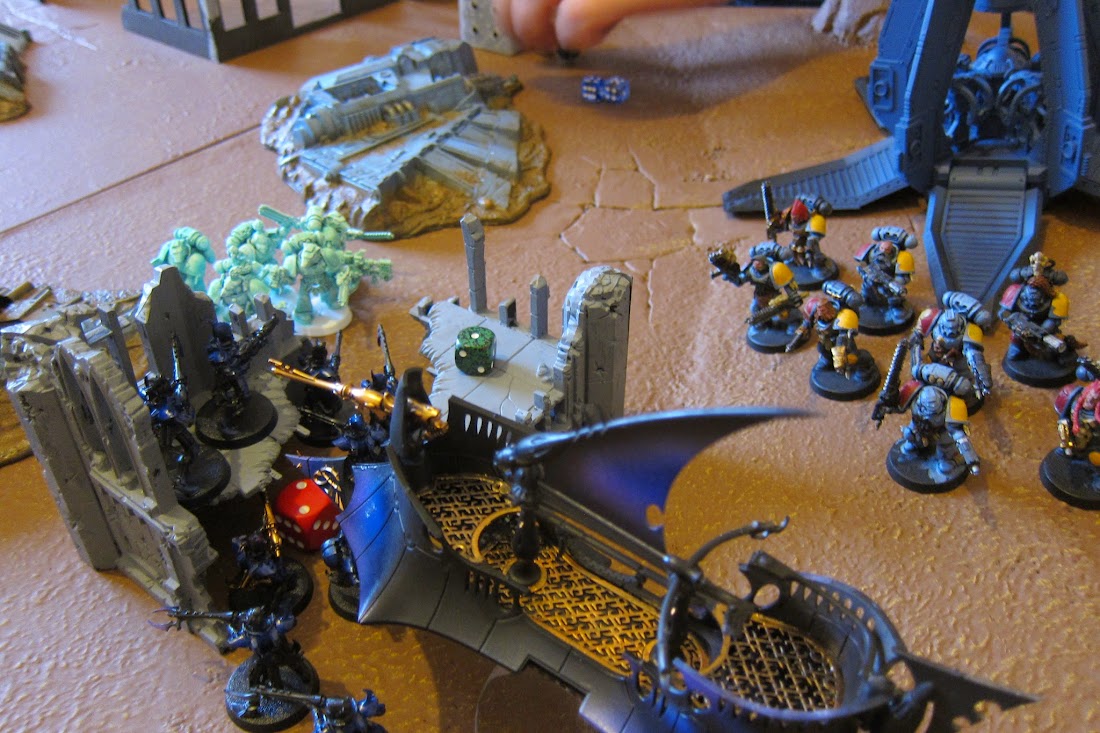 Dark Eldar disembarked onto the objectives, but then the Legion of the Damned and a drop pod of Grey Hunters appeared 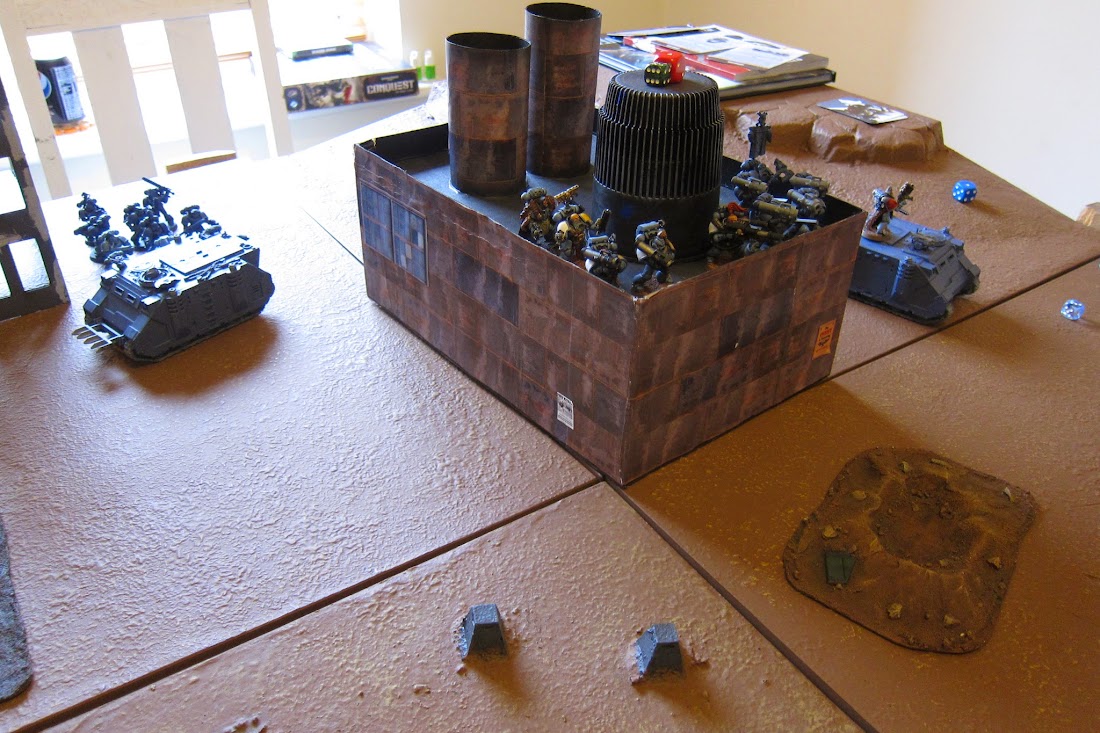 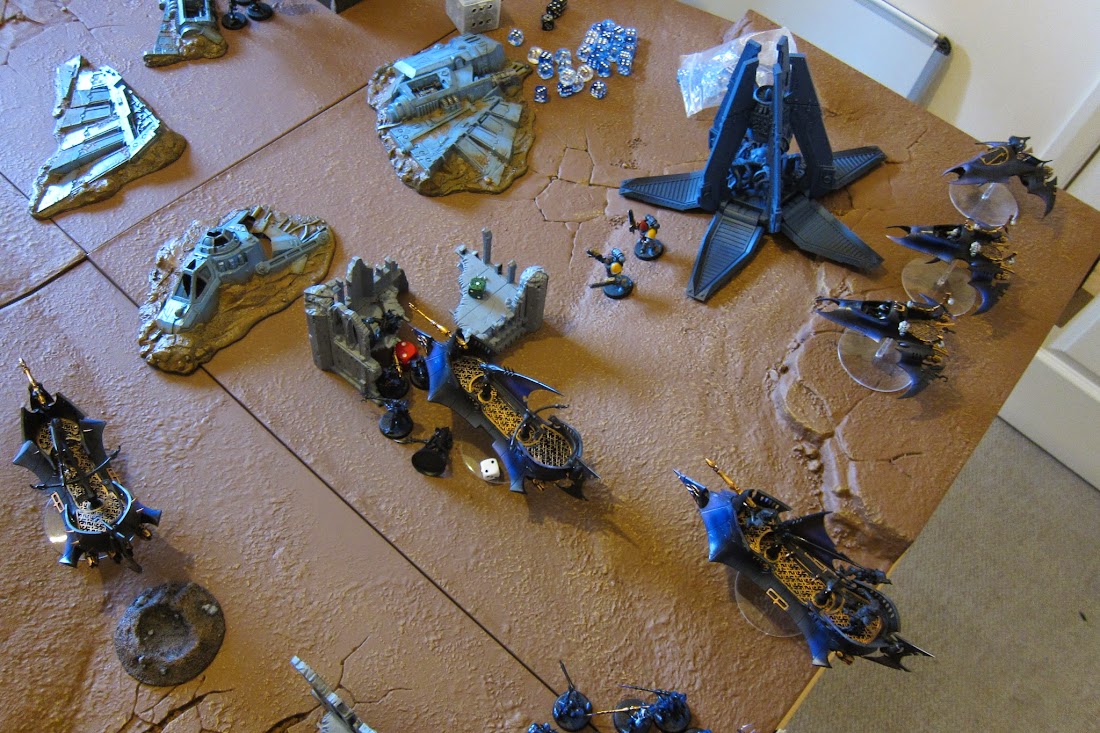 Now the trouble begins! as most of the Dark Eldar arrive from reserves and shoot down all but 2 of the Grey Hunters, and all of the Legion of the Damned 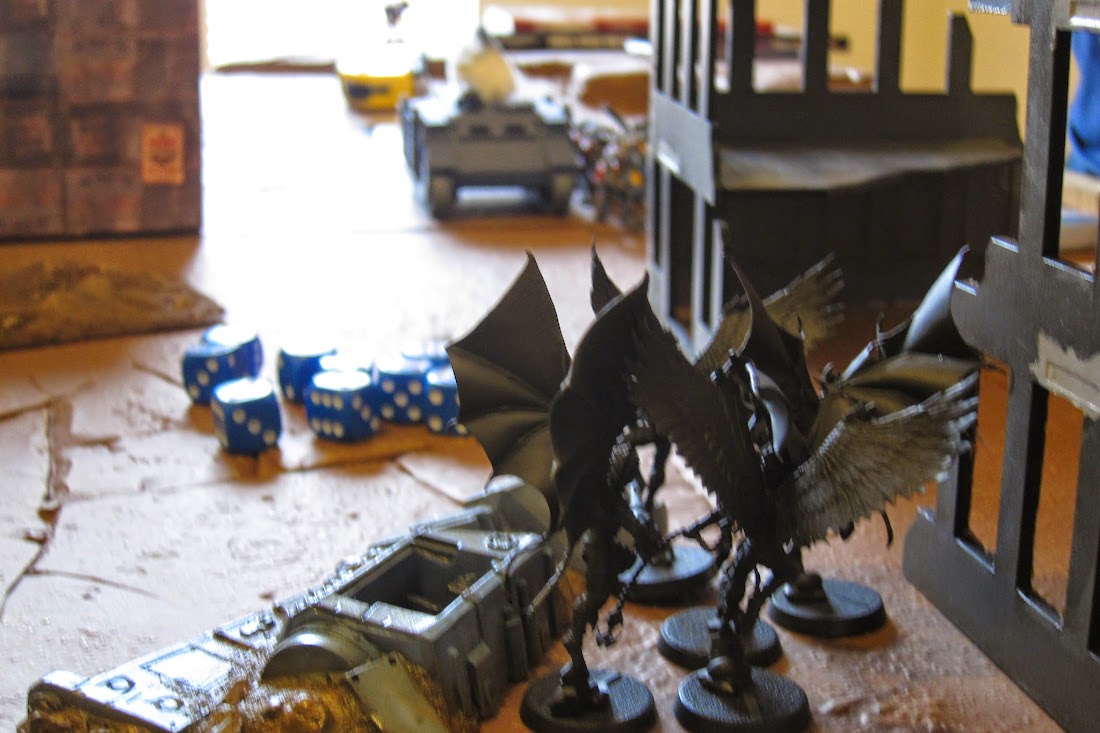 Scourges deep strike in, but miss their desired landing spot – they still manage to help take out the Rhino on the left flank but are in the open with no cover 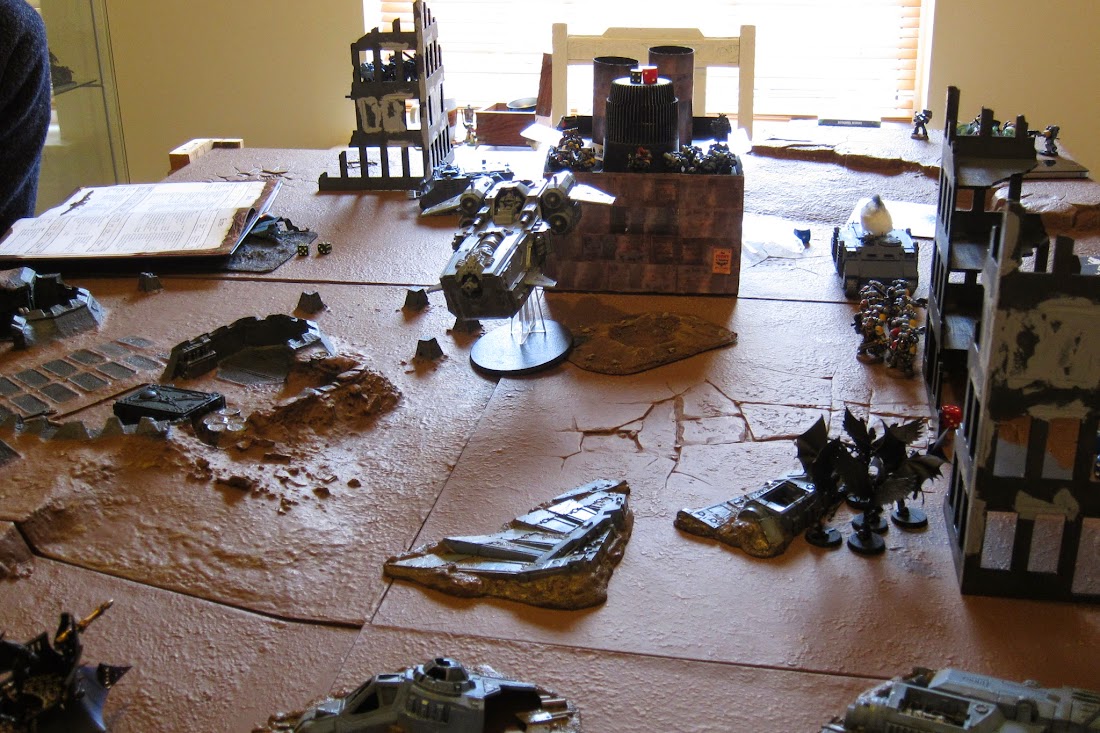 The Space Wolf gunboat comes in from reserves as the Grey Hunters advance on the Scourges!

Unfortunately, official records for the rest of this battle were lost, but from witness accounts some picture of the battle can be pieced together:

The Dark Eldar Archon and his Incubi retinue, aided by 2 squads of Trueborn Kabalite Warriors, easily eliminated the Grey Hunters that killed the Scourges, then began to turn their attention on the Long Fangs occupying the manufactorum before the fighting ended

Kabalite Warriors performed a deep strike on the left flank, however they missed their objective but were able to help take down the Space Wolf gunboat before the battle finished

In the end, although the Dark Kin were rebounding, the Space Wolves took the final victory 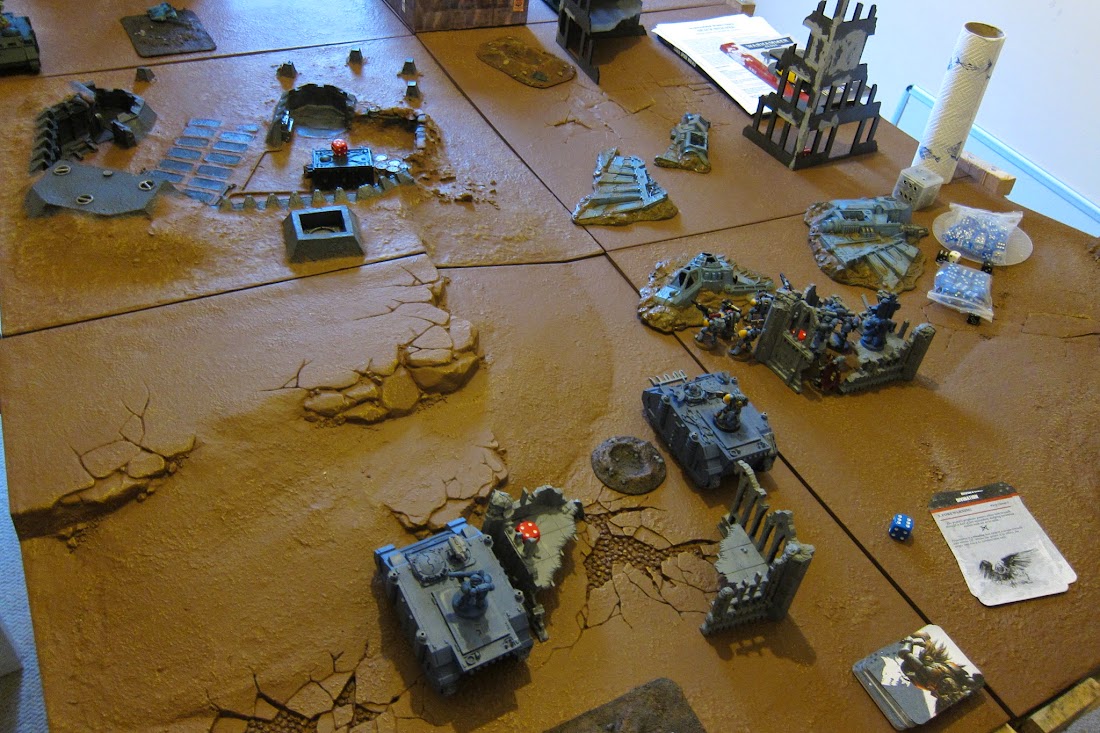 David’s setup for the 2nd battle 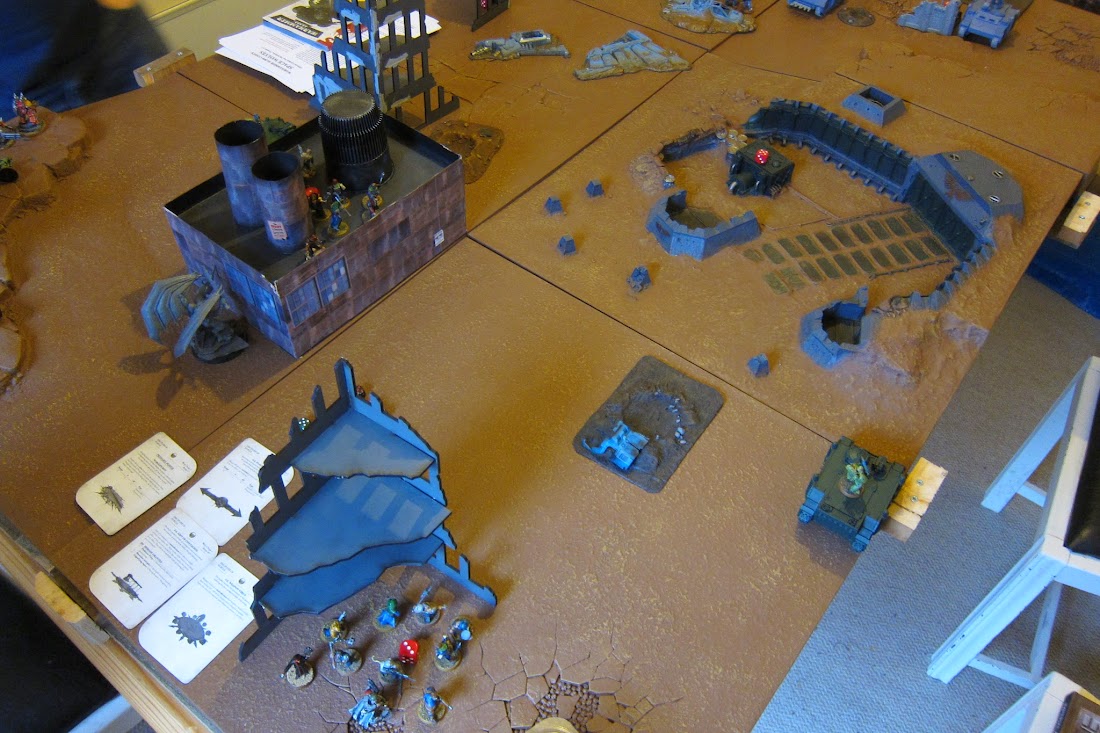 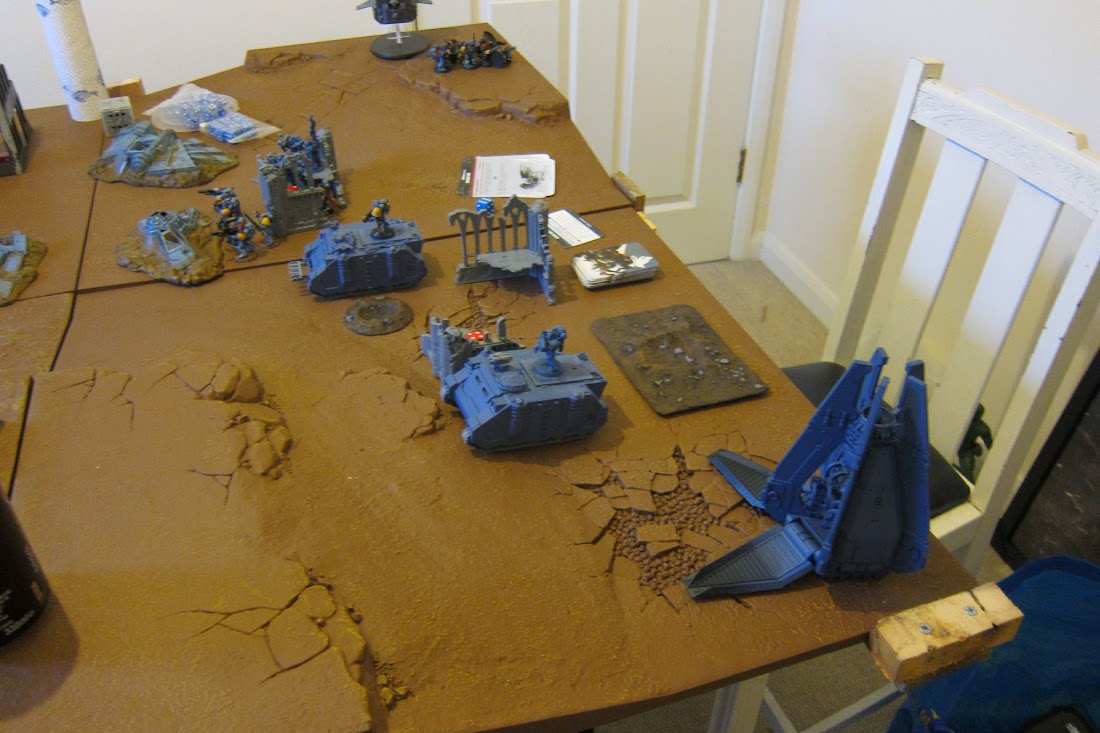 A mishapping Drop Pod landed at the farthest edge of the table, far far away from the forces of Chaos 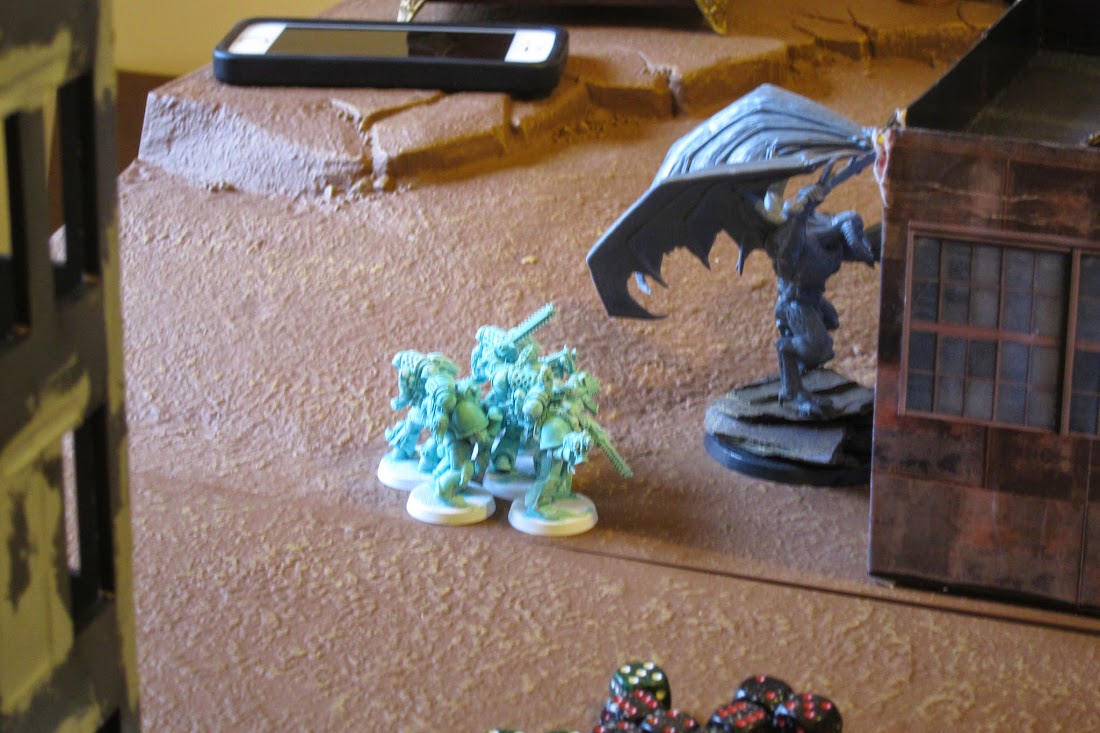 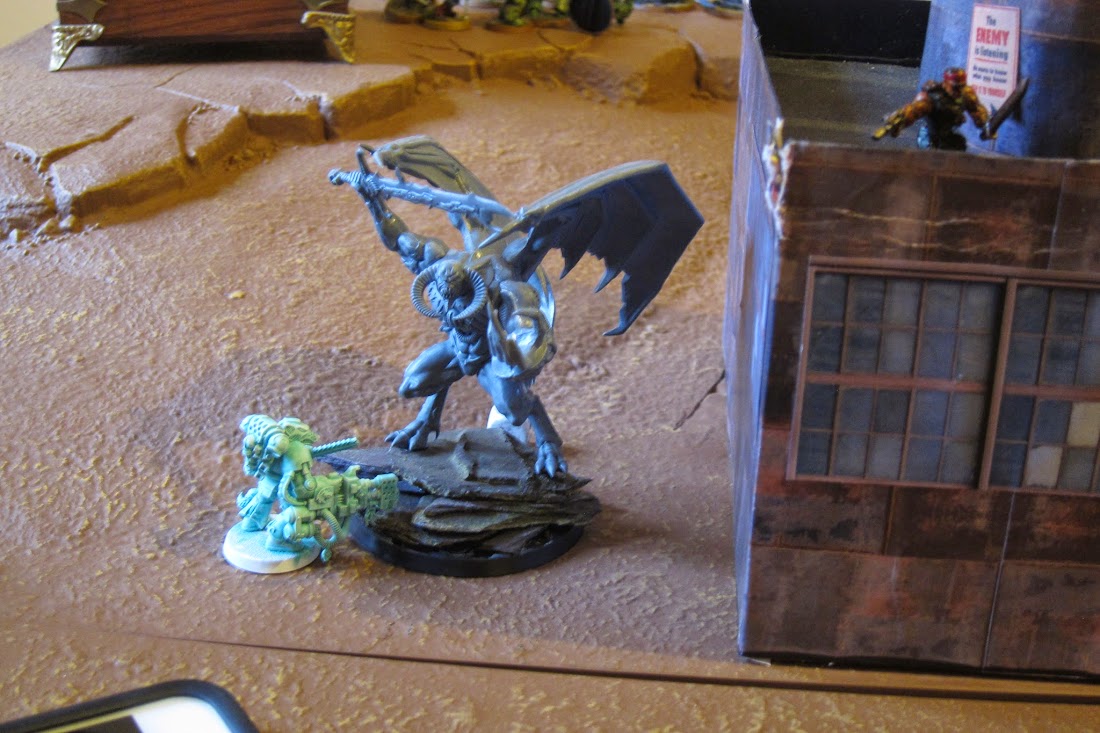 Unfortunately, with out the Grey Hunters in the drop pod, they were all alone with no support… 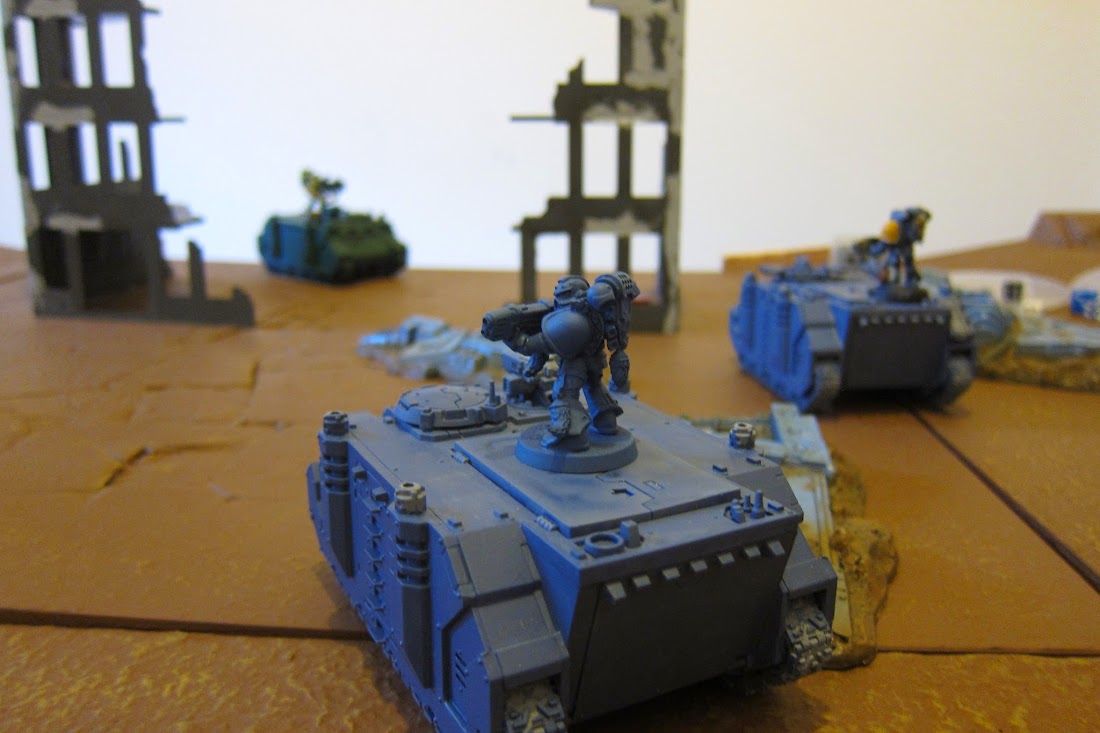 We’re Rhino-surfing, we’re all Rhino-surfing!
…on the way to a long battle with the Plague Marines in the distance 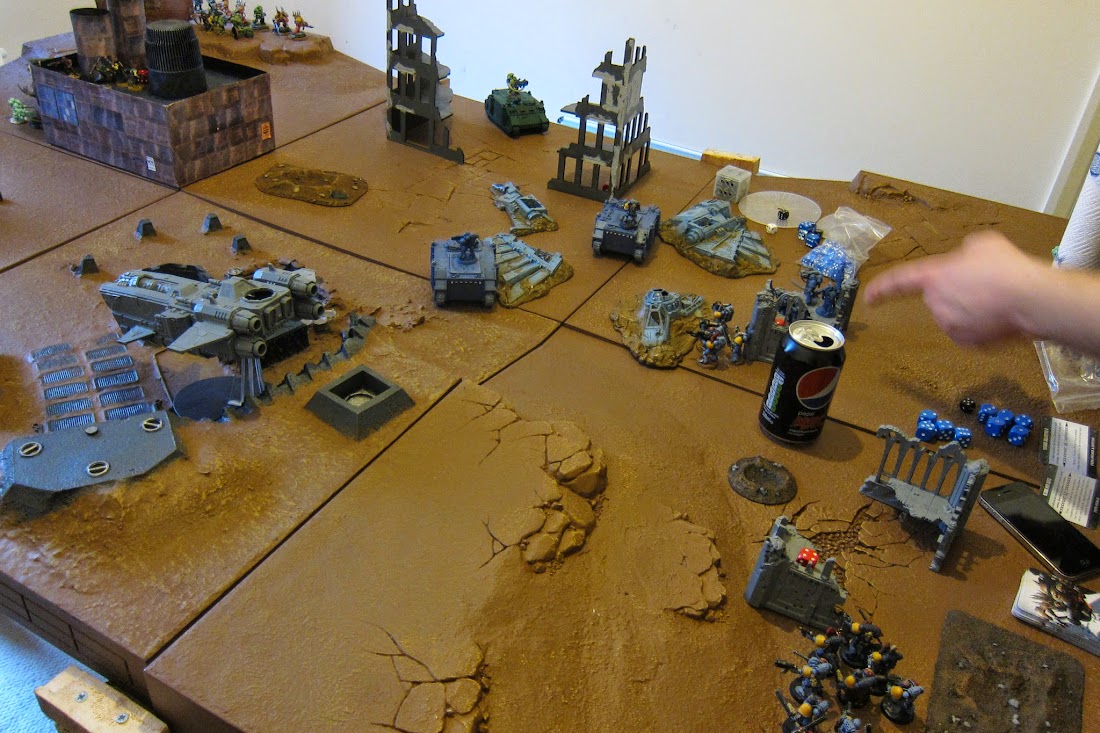 Dave’s gunboat swings onto the battlefield, searching for targets 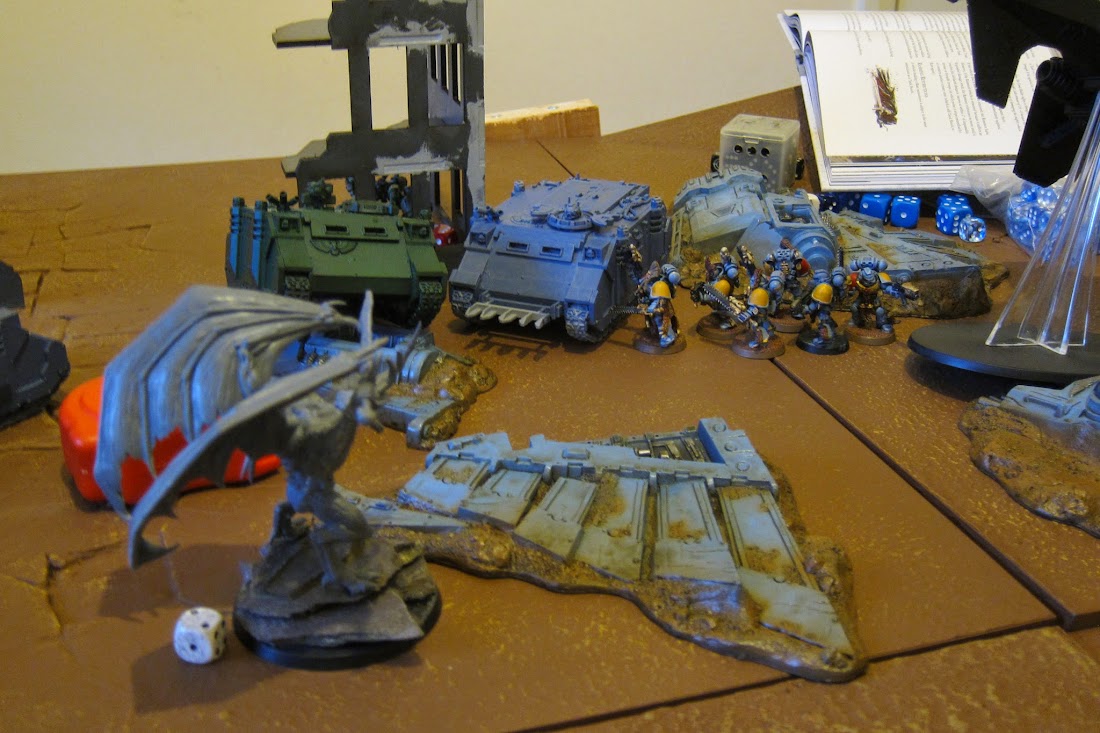 Freed from his combat with the Legion of the Damned, the Daemon Prince flies forward into the fray! 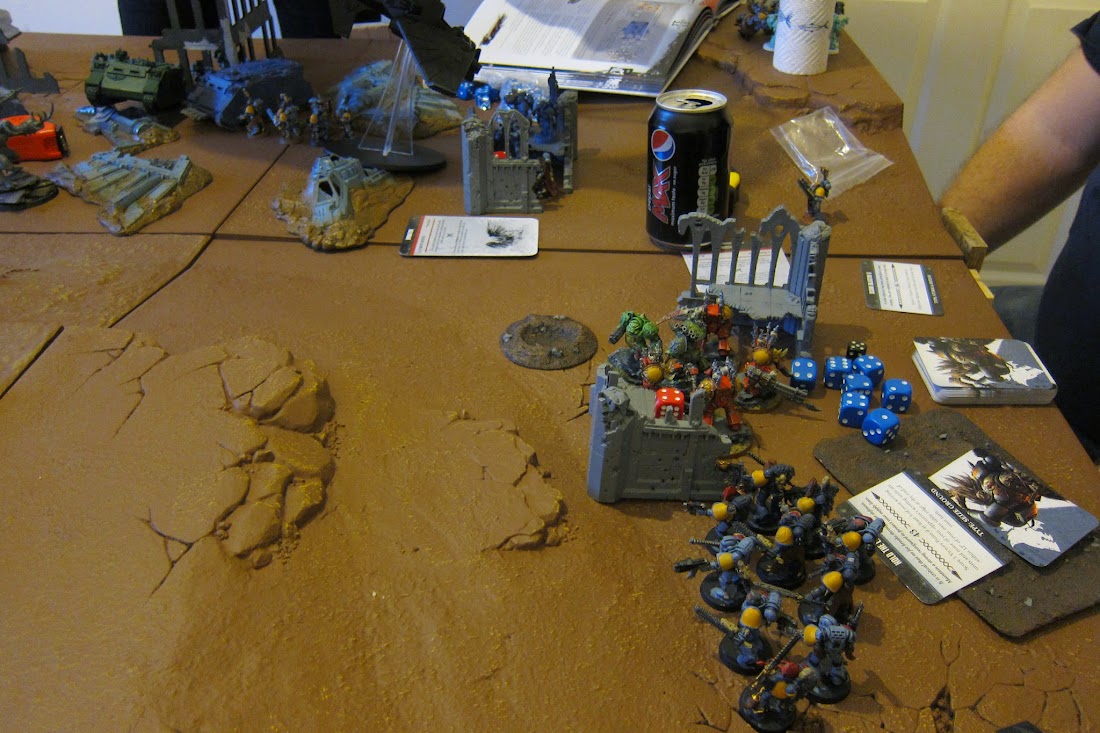 Typhus and his Terminator cohort join the fun, casting Nurgle-tastic psyker powers at will (almost) 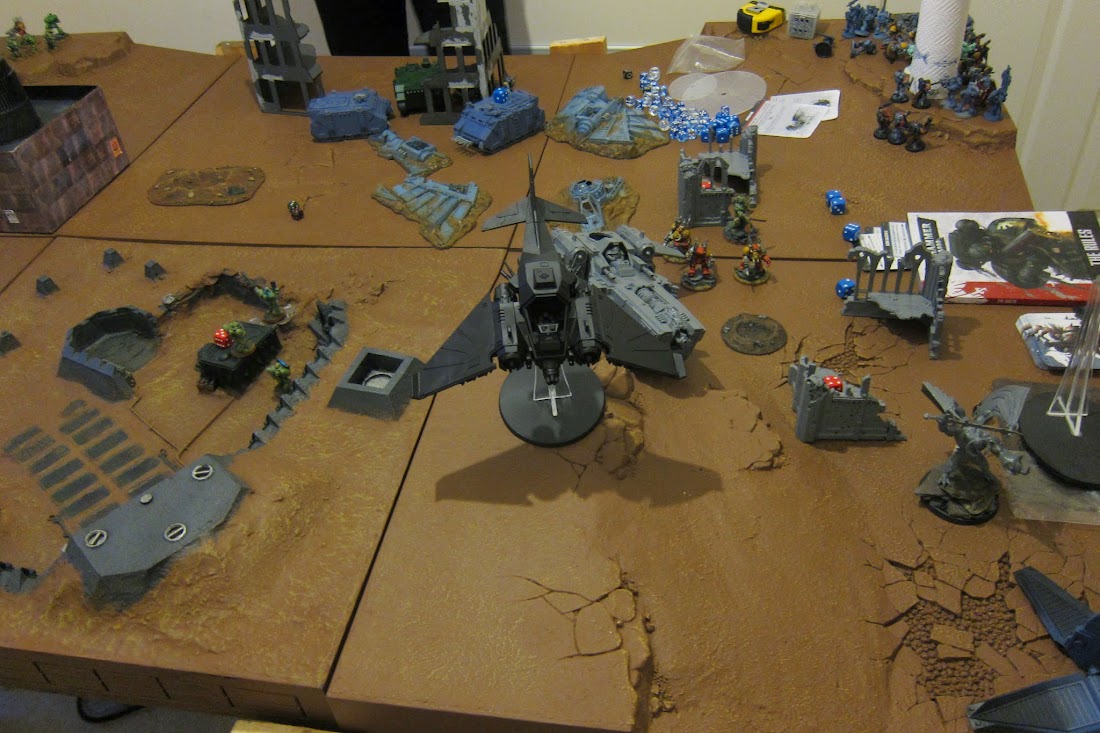 With the Space Wolf gunboat wrecked, the Heldrake (proxied here by a Dark Angel flyer!) is free to float over the battlefield, roasting Grey Hunters at will 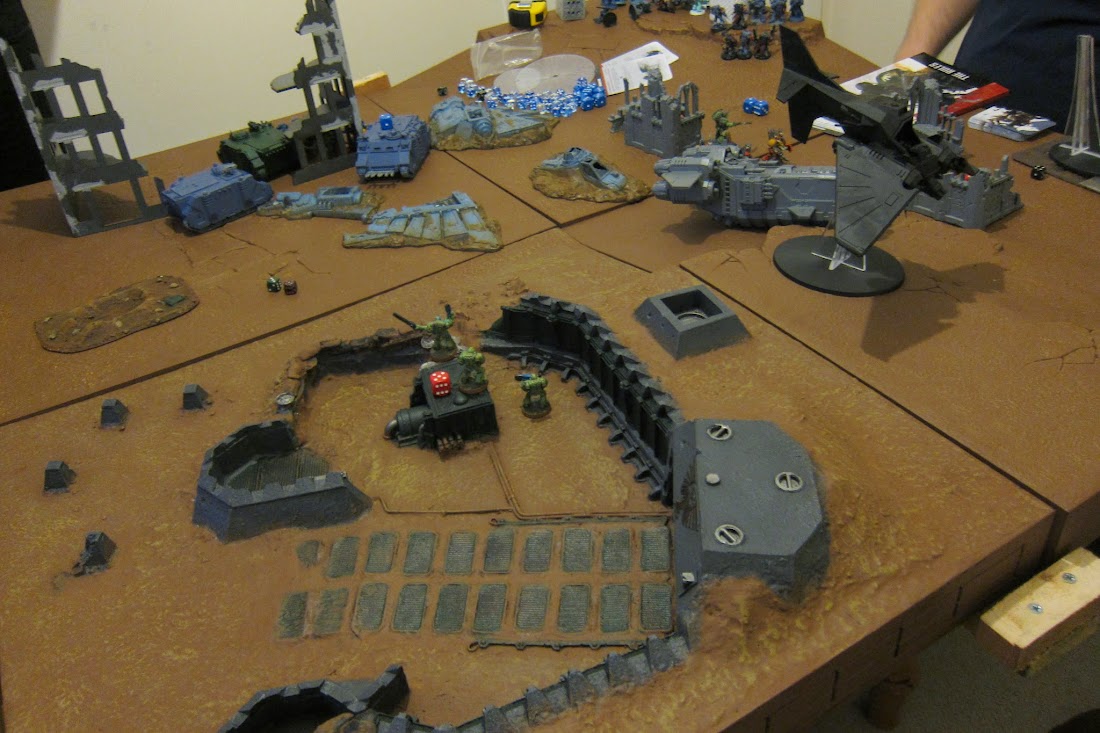 Meanwhile, some of the surviving Plague Marines occupy one of the central objectives and rejoice in their well-deserved victory