Two games with the Hammertime 40K crew today! Most of us were able to show up and get in a 2 vs 1 game starting just before noon, and around 3 we started a 4-player free-for all using the just-released Carnage rules from Black Library. 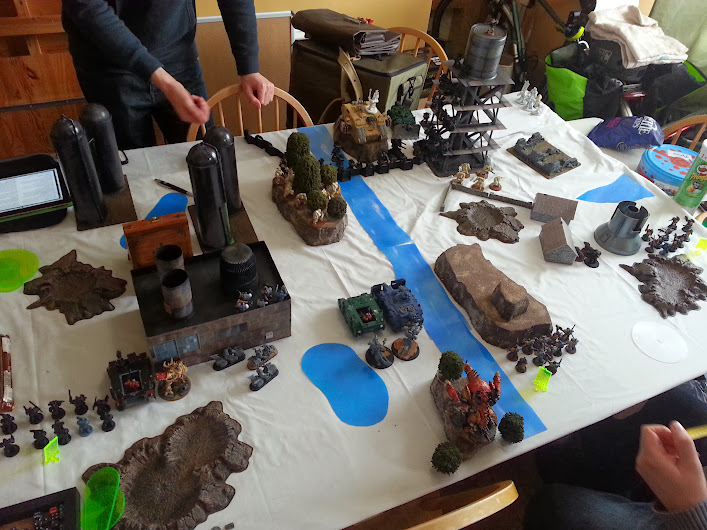 This was deployment for the first game, using a scenario from the Crusade of Fire: Dark Angel book with the attacking players setting up first, then the Dark Angels deploying second. Dark Angels got lucky with just a single objective they could camp on, and in the third turn a random selection of Heavy Support units would come in.

Dark Angels got lucky again by going first, taking out the central Vindicator of the Space Wolves. The Chaos/Space Wolves force moved up, with the left flank taking a long time to work toward the center. The middle of the board was a wastleand, with Terminators, Space Marines, Wolves and more dying by the score. The right flank of the unholy alliance was struck down by a combined effort of Dark Angel Deathwing Terminators, Tactical Squads and the Hurricane Bolters of the Land Raider which sat on top of the sole objective.

Not even the arrival of a single Heldrake, which took the lives of 11 Dark Angel marines, could break the wall of defiance. Before long, the battle ended with most of the Chaos/Space Wolves forces decimated and the Dark Angels victorious. This was roughly the starting point for the 4-player game (I say ‘roughly’ because this was taken partway through the first turn), with DW at top right going first and playing continuing clockwise around the table, with Frank next at bottom right, Shane at bottom left and Jack going last at top left (shown here Deep Striking his Deathwing behind Shane’s Assault Marines!).

Things did not go well for Shane’s Marines, but they were able to take out many of Jack’s Deathwing and a couple of Ravenwing, who went on to attack the central Artifact objective. DW kept hammering Frank’s Chaos Space Marines while Frank’s Forgefiend clanged away at the Space Wolves turn after turn, even after losing one of its arms.