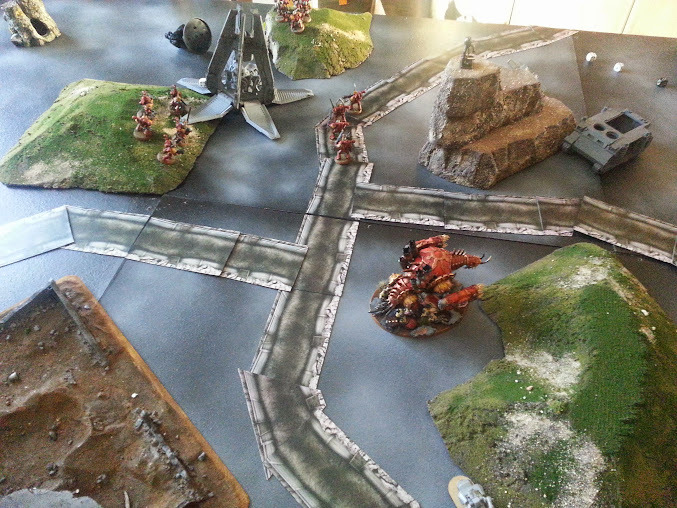 Played a 1000 pt game with Shane tonight, had a lot of fun, it was a lot closer than we expected! We went for a smaller game than normal just to ease back into things, and didn’t go for a video batrep because we’d spend a ton of time looking up rules, etc.

Set up the board with normal terrain spread, then added 2D trenches I printed and cut out recently. It mainly affect the vehicles but made for an interesting look to the battlefield too. It’s difficult terrain but grants 4+ cover, which could be useful against the Vindicator guns.

After deployment, we rolled for Warlord Traits, and lucky too, because I got the one that allows infantry to re-deploy with Infiltrate! I was able to get right up to where the Speeder was hiding and put him right in range, and I moved the Havocs from the back edge of the table to nearly in the middle. I left the Relictor ‘Block of Cheese’ alone because my bikers were already in position to do something but they were infantry and couldn’t use Infiltrate.

Turn 1: the Speeder got blasted and 3 guys from the command squad of Assault Marines were taken out by the Forgefiend – they fled the table which was literally 1″ off their back heel! So that was that. The Bikers moved around (should have just sped forward) but couldn’t hide completely, so the Chaos Lord and another biker were killed right off by a Vindicator shot. So that was one Warlord Kill apiece but at least I had First Blood! The remaining squad of Assault Marines stayed hidden (wusses) and the Dreadnought dropped down but didn’t kill anyone.

Turn 2: the Dreadnought bought it from the Havocs and the Bikers milled about a bit more, unsure what to do. The Vindicators took out another Biker, though. It wasn’t looking too good for the Relictors at this point, but the tide could turn at any moment!

Turn 3: the Forgefiend bought it finally and the Bikers were taken down to just a single bike after getting smashed by the Vindicators’ guns. The Assault Marines finally came out of hiding…into another hiding place! 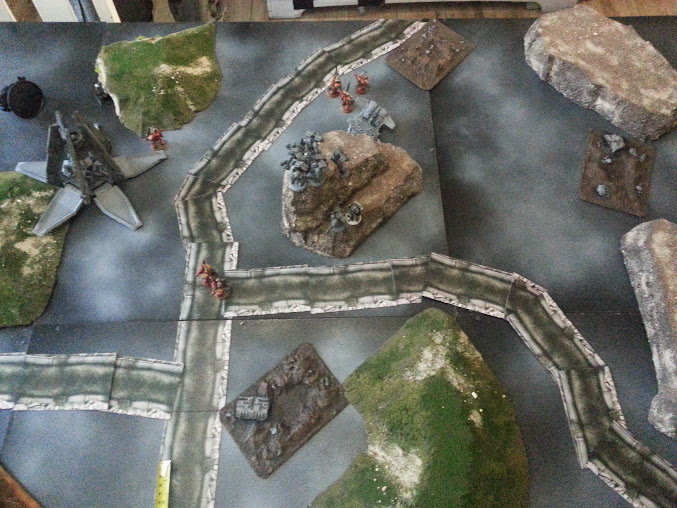 Turn 5: the Chosen move closer with the last Melta, destroying the second Vindicator, while a single Chosen from the other squad makes a run for an objective! The turn ends with the Assault Marines swarming the central objective (advantage Shane!)  and trying to shoot the Chosen going for the nearby objective, but not getting past his armor! The game continues! Advantage Frank!

Turns 6 & 7: 2 of the 7 Assault Marines are shot off their perch, and they decide to jump down to assault the single Chosen who is holding the objective on the ground…but FAIL their charge! Advantage Frank! The game continues! Advantage Shane!

Even shooting at their backs, none of the Assault Marines are killed (in fact, a Gets Hot roll killed one of the last Chosen!), so they move in and assault, killing the single Chosen and losing none in return, taking the objective! Advantage Shane! Then the remaining Assault Marines are shot away, making their Leadership tests as they go, but all dying eventually.

We may have gone to turns 8 and 9 in this game (I’m sure we lost count somewhere along the way) but it was REALLY fun and a nice way to ‘come back’ to the game after a month away.